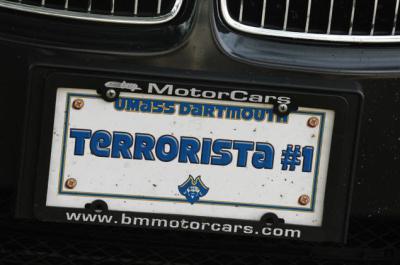 A little over a week ago The D.C. Clothesline reported that two men were arrested on “administrative immigration violations” in this article. To refresh your memory, we were following a lead from New York Daily News who reported that two friends of the bombers were taken into custody.  The story is hard to forget when you permanently embed the image of this sickening vanity license plate into the nether regions of your mind. What kind of sick and twisted individuals celebrate terrorism?

Well it turns out that our suspicions of a week ago were likely correct and a third individual has emerged as well. NBC News is reporting today that 3 of Dzhokhar Tsarnaev’s college friends have been arrested:

Three college friends of Boston Marathon bombing suspect Dzhokhar Tsarnaev were charged Wednesday with removing a backpack and fireworks from his dorm room or lying about it to the feds.

Attorneys for the three suspects that were arrested for allegedly assisting in the Boston Marathon bombing maintain their clients’ innocence and say that they were shocked by the attack.

Tazhayakov and Kadyrbayev, who are from Kazakhstan and were detained more than a week ago on immigration charges, did not seek bail and were ordered held until a May 14 hearing.

Phillipos, who went to the same Cambridge high school as Dzhokhar, is also being held until a detention hearing Monday. As he was being read his rights, Federal Judge Marianne Bowler admonished him. saying, “I suggest you pay attention to me rather than looking down.”

This story is very slow to develop and I suppose this is the speed of justice. The good news for these young men is that, Allah willing, they will someday be sent to a place where they can make all of the license plates they want.