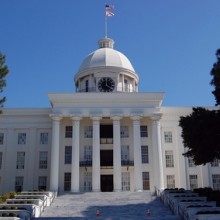 The Alabama State legislature is warning the federal government and other to back off on gun control legislation. On Tuesday, the Alabama State Senate passed legislation that declared “All federal acts, laws, orders, rules or regulations regarding firearms are a violation of the Second Amendment.”

The vote was 24-6 and also declared that all federal laws in violation of the Second Amendment (which are all of them) would be considered null and void in Alabama.

Republican Senator Paul Sanford of Huntsville confirmed that the legislation was the result of hundreds of emails and calls he received from his constituents in north Alabama. Those constituents were concerned about the threatening manner in which Congress has been hell-bent on gun control legislation. Especially new gun restrictions, including a ban on multiple weapons, such as Senator Dianne Feinstein (D-CA) had put forth.

Democrats tried to save face. Senator Bobby Singleton (D-Greensboro) denied nullification. “”This bill is null and void on its face,” Singleton said. Perhaps Mr. Singleton should pay attention to Founding Father James Madison onnullification, instead of the liberals he got his thinking from.

In the House Tuesday, members voted 76-22 for a proposed constitutional amendment that would require Alabama’s courts to use “strict scrutiny” when reviewing any new gun control laws. That would require proponents of the laws to show a compelling interest for the regulations and that they be narrowly tailored.

The Second Amendment bill sponsored by Republican Rep. Mike Jones of Andalusia was part of the “We Dare Defend Our Rights” agenda that the House Republican Caucus set for the 2013 session. To take effect, the bill still must be passed by the Senate and approved by Alabama voters in a statewide referendum.

In the Senate, Sanford said he was not trying to declare all federal gun laws void. Instead, he said he hoped that if Congress were to pass gun controls, the legislation would permit the state attorney general to issue an opinion that the law was unconstitutional and then Alabama law enforcement officers could refrain from enforcing it.

Sanford indicated that he was not attempting to declare all federal gun laws void. I don’t understand why not, since that is exactly what they are. The Constitution refers to the Federal government and specifically indicates the rights of the people to keep and bear arms “shall not be infringed.” Infringed by whom? The Federal government. What’s difficult to understand about this?

Mr. Sanford, who carries his gun regularly said, referring to new gun control legislation that Congress may pass in which the state attorney general might declare it unconstitutional, “We are going to declare it null and void and not participate with the federal government.”

Sanford’s bill would have to be passed by the House and the signed by the governor to become law. Getting it passed in the House will be difficult due to the fact that there are only four meeting days left in the 2013 session.

Citizens of Alabama who wish to urge their representatives to vote on this bill and get it passed before the session expires are encouraged to contact them here.