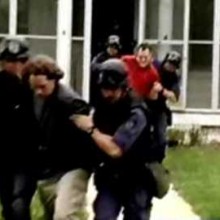 A Department of Homeland Security (DHS) training video depicting DHS agents in a fake news reel arresting “militia” extremists for “illegal possession of firearms.” That’s right the depiction is about the militia, those mentioned in the Second Amendment, and it further spoke about illegal firearms. Nothing illegal about any firearms in the Second Amendment. What they failed to have for a training video was Islamists and pressure cookers.

This video, along with a cache of training video at the DHS website, which can be found here and an introduction here are just another step towards training the minds of men and women serving in federal agencies to think that gun owners and militia are the bad guys.

Interestingly enough this is under DHS’ FEMA website and the program it promotes is called Homeland Security Exercise and Evaluation Program (HSEEP). Yes, I thought maybe they misplaced some letters there and were thinking more along the lines of SHEEP.

Exercises play a vital role in national preparedness by enabling whole community stakeholders to test and validate plans and capabilities, and identify both capability gaps and areas for improvement. A well-designed exercise provides a low-risk environment to test capabilities, familiarize personnel with roles and responsibilities, and foster meaningful interaction and communication across organizations. The Homeland Security Exercise and Evaluation Program (HSEEP) provides a set of guiding principles for exercise programs, as well as a common approach to planning and conducting individual exercises. This methodology applies to exercises in support of all national preparedness mission areas and ensures a consistent and interoperable approach to exercise design and development, conduct, evaluation, and improvement planning.

The video seen above is used to help train all of the deputized agencies during a crisis, including hospital administrators, media faces, and everyone that would be involved in such an event.

When the video was created is not entirely clear. However, documents have been uploaded between 2009 and 2012.

In the video the fake news reel has the anchor saying, “Reports of possible illegal activity by a local militia group appears to have spurred law enforcement into action.”

The video then cuts to the front of the house where firefighters and SWAT team members are all over the place.

“This is the scene of an intensive investigation into the operations of an extremist group reportedly planning a series of terrorist attacks on U.S. cities,” the fake reporter says. “Details are sketchy, but allegedly the militia was using this house to store a cache of military weapons.”

All sorts of agencies are reported to be on the scene, including the FBI and that the house being raided belongs to two men. The house was being raided for “illegal possession of firearms, but they apparently found more than they were bargaining for.”

Near the end you see a SWAT officer attempting to remove the cameraman while another officer is heard shouting “Get him out of here!”

A few things to consider from this video. As I mentioned, militias are perfectly legal under the United States Constitution. Keeping and bearing arms is supposed to be protected under the Second Amendment of the Constitution as well and as we’ve taken the time to point out, the federal government has no authority to regulate or restrict arms. They just aren’t given that authority in the Constitution. Therefore, the claim of “illegal possession of firearms” causes one to wonder, are these men felons and shouldn’t have a firearm? Are these men in possession of illegal guns and if so, upon what basis are they declared illegal? Federal legislation or state legislation?

One thing you don’t see in the list of videos is Islamic terrorists taken into custody. That may appear somewhere else, but not in this video section. I’m highly cautious if there are training videos with Islamists, who, frankly, are the ones that continually are the ones we deal with in terrorist threats. I would be surprised if there were some considering DHS produced a study titled Hot Spots of Terrorism and Other Crimes in the United States, 1970 to 2008 in which for the most part they omit any reference to Muslims or Islam and instead focus on Americans who are “suspicious of centralized federal authority,” and reverent of liberty” as “extreme right-wing” terrorists. We can already see where the mainstream media get their assumptions about “right wing extremists” being responsible for the Boston Marathon, even though it is painfully clear who was involved. It wasn’t right wingers. In fact, the Obama administration pulled all references to Islam from its training manuals. Now they are focusing our Armed Forces on Americans; specifically they are targeting the enemy of Islam, Christianity.