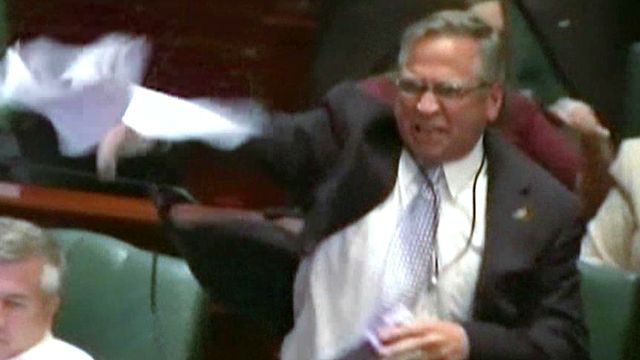 It’s been two weeks now since Mike Bost, an obscure Republican Representative in the Illinois House, launched a tirade that went largely unnoticed by the media. In fact, if it weren’t for this story at The Blaze, I would have likely never heard about this.

America deserves this kind of passion from their leaders. America could use a few more Rand Paul filibusters and Mike Bost bipolar moments in my opinion. Our lawmakers sit comfortably in their seats, calm and collected, and make policies that spit in the face of every man, woman and child in this country and no one ever seems to raise their voice. It appears that Bost’s explosion was a result of Democrats trying to sneak an amendment through that destroyed the very foundation of a concealed-carry bill. Bost commented in an interview with Mt. Vernon Register News:

“The amendment that was added to the bill we were discussing was a ‘may/may’ carry bill,” Bost said. “New York has a similar bill, and less than .01 percent of people get to carry. Under the amendment, someone would have to go to the local sheriff, who would do a background check, talk to people, then the sheriff may allow the person to petition the state for a concealed carry permit. Then, the state would do a background check and may issue a permit. That’s two mays and makes it almost impossible to get a permit. The bill was flawed and I explained that problem.”

Details are details and we have come to expect this from both State and Federal government. It’s all about “playing games” and constituents are simply pawns in those games. The bottom line is that Mike Bost is someone who seems to understand the meaning of “Shall Not Be Infringed.”

I tip my hat to Mike Bost for acting like an American. If we had more like him then I feel there would be less problems in this country. Some may see him as a loose cannon and I see him as an American. America was founded by a bunch of “loose cannons” who were no longer willing to bow to the rule of tyrants. Check out this passion. This is what Americans are begging to see from our lawmakers:

The second amendment is not about hunting deer, it is about protection from tyrants. Those tyrants come in many forms. They can be common criminals, legislators who overstep their bounds or Extremist Muslim Jihadists who shout “Death to America.”

The American people are sick of seeing their rights systematically taken away. These rights are protected by a constitution which we hold dear but they were given to us by God. Anyone who doesn’t like it is free to leave.

Again I would like to say that Mike Bost’s tirade means something to me. It means that there are still a few representatives in government that share my passion. Average Americans are tired of the stuffiness of government proceedings. They want to see truth and passion. They want to see people who have the guts to fight for what is right. Well, through Mike Bost we saw truth and passion come alive again in the Illinois House of Representatives. Thank You Mr. Bost for standing up for what is right. I appreciate that you apologized to your fellow legislators but you don’t have to apologize to your fellow Americans who know exactly how you feel.

Under no circumstances will Patriotic, God-Fearing, Constitution-Loving Americans give up their right to bear arms. This is not negotiable.

Come and take them.