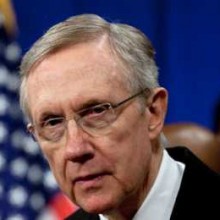 While many of us been saying that the Affordable Care Act, aka Obamacare, was a trainwreck, Senate Majority Leader Harry Reid (D-NV) still has not taken the “red pill” and affirmed that is what it is. However, Reid told radio host Rusty Humphries that it could become one if it’s not implemented properly. With that said, Reid said that Barack Obama would be needing money, which he would take from “less important” things, to fund the behemoth that is Obamacare.

“Max said unless we implement this properly it’s going to be a train wreck, and I agree with him,” Reid said, recalling a warning delivered last month by Senate Finance Committee Chairman Max Baucus (D-MT).

He also tried to pin the problem on the Republican Congress, who I will point out didn’t cast a vote for Obamacare, but did fund the entire implementation of it. He said they were opposing the spending of enough money to implement it.

“Here’s what we have now, we have the menu but we don’t have any way to get to the menu,” Reid said.

Then he shifted gears and said that Barack Obama would do whatever he needed to do to make sure it was funded. He failed to mention why Obama wouldn’t do that earlier instead of releasing aggravated felons into the population because of sequestration. Of course, they acknowledged something along those lines after the fact.

“The president is taking money — I wish we had the money just to do this on its own, but he’s agreed, he’s determined he’s going to take money from some of the other things that he feels are less important in the healthcare bill and put it on letting you and others know what’s in the bill,” Reid told a caller to the show.

He also continued to defend the massive health care law that is anything but affordable. “I believe that a country of our size, the only superpower left in the world — it’s not right that we have 50-60 million people … with no health insurance,” he said. “We have to have a program where health insurance shouldn’t go to people who are rich, people who are upper-middle class. I believe the middle class and people below the middle class deserve to go to the hospital when they’re sick.”

“I believe the middle class and people who are below the middle class deserve to go to the hospital when they are sick,” he added. “You shouldn’t have to declare bankruptcy when you have a traffic accident or some dreaded disease hits your family.”

While he claimed to be familiar with the bill that was thousands of pages long. “Of course I read it. I didn’t sit down on a Friday evening and read it. This legislation was drafted over a period of months and months,” he said. “I can pass a test on it. I knew the law pretty well.”

Townhall’s Guy Benson addresses Reid’s arguments, especially as he tries to pin the issue of underfunding Obamacare on the Republican Congress. He writes,

Where to begin?  First, notice how these problems are never, ever the fault of the disastrous law itself.  No, it’s always the Republicans’ fault — or the public’s, for not properly understanding how great the new program really is.  President Obama effectively advanced the latter argument at his Tuesday press conference: Ninety percent of you rubes are already enjoying the wonders of my munificence, even if you’re too dense to realize it.  Thus, now we’re back to Democrats lamenting their inability to “tell better stories” or whatever, even though they’ve had the presidential bully pulpit for five years, and a generally pliant media running interference for them.  We’re informed that a law whose price tag has already doubled — and is likely to rise even further –  requires additional taxpayer dollars to finance yet another PR campaign for itself.  But weren’t Obamacare’s provisions going to convince us all, just as soon as it was fully implemented?  Lower premiums!  Reduced deficits!  Cost curve down!  Keep your plan!  Plenty of doctors!  None of that is actually happening, though, so the only conceivable solution is to appropriate more money to temporarily prop up public perceptions for awhile.  “Re-education” funds, as Kathleen Sebelius might call them.  Nevertheless, no amount of slick advertising can erase what even elected Democrats and mainstream journalists can see with their own two eyes.  (Part-time worker?  Sorry, bud).  Empirical results are almost irrelevant to the party of “science.”  Case in point: A hot-off-the-presses landmark study on Medicaid, the results of which are devastating to government healthcare cheerleaders.

In a sane political world populated by quasi-rational actors, this research would be a true game-changer.  Here we have solid, methodologically-sound evidence that an enormously expensive government program — Medicaid — is failing to improve health outcomes for low income Americans, compared to being uninsured.  Which is the entire point of the program.  It turns out that Medicaid recipients also aren’t cutting down on hospital and emergency room visits, another favored talking point for universal coverage.  The primary difference between beneficiaries and their uninsured counterparts is that the former group uses healthcare services more, thus raising expenditures.  One of this study’s co-authors just happens to be a key designer of Obamacare (MIT’s Jon Gruber), so this can’t be written off some right-wing hatchet job, either.  The new program Gruber helped create calls for the massive expansion (by 11 million people) of an old program that Gruber has now determined doesn’t work.  Ta-da!  Liberal activists and journalists, meanwhile, are feverishly churning out copy to distort the results and salvage what they can from this catastrophic blow.  Be sure to check out Avik Roy’s must-read piece that methodically rebuts apologists’ straw-grasping.  But will this data earthquake impact actual policy one wit?

I think Allahpundit may have the correct perspective on this as he writes, “This is an “identity” issue for Democrats — they’ll fight to protect the welfare state, whether it works or not, whether we can afford it or not — and as with abortion (or guns on the right), they won’t cede an inch on “slippery slope” grounds.”