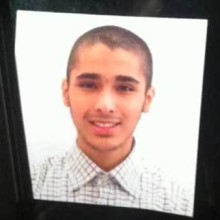 In what has to be one of the most bizarre things I’ve heard, a federal judge ordered terrorists suspect Abdella Ahmad Tounisi, 18, to be released to home confinement while he awaits trial on charged that he signed up to fight in Syria for a terrorist group tied to Al-Qaeda.

The U.S. attorney’s office appealed the decision which put a hold on the release. Another judge is to consider Tounisi’s bail today.

Federal prosecutors said that he was a flight risk and a danger to the community. He was arrested April 19 at O’Hare International Airport.

Prosecutors allege that Tounisi posted messages on a phony website set up by the FBI agreeing to travel to Syria to fight with the Al-Nusra Front militant group. According to authorities, Tounisi has links to a second Chicago-area terrorism suspect, Adel Daoud, who was arrested in September after he tried to set off what he thought was a bomb outside a downtown bar. The two were close friends and plotted the bomb attack together, prosecutors allege, but Tounisi backed out when he suspected law enforcement was on to them.

In ordering Tounisi’s release, U.S. Magistrate Judge Daniel Martin repeatedly called the decision a “close, close” call but said that pretrial detention is intended to be an “exceptional step.” Martin also said he was convinced in part by a courtroom packed with family members and leaders from Tounisi’s religious community. The judge also cited Tounisi’s lack of criminal background.

Martin’s voice shifted to a stern tone as he directly addressed Tounisi, warning him not to break any of the rules he had set for his release. Martin acknowledged the rare opportunity he was giving him, noting the seriousness of the charges and the allegations that Tounisi intended to harm people here and abroad.

Judge Martin names the boy’s father as his custodian and wanted to make sure that he followed the court’s orders. I’m guessing someone had not thought all of this out, seeing that the boy was ready to fly to Syria and join a terrorist group. Did anyone think to see if the father approved?

While Tounisi’s attorney, Molly Armour, denied he was a flight risk, saying that neither he nor his family had the resources to help him flee Chicago, and that he had already tendered his passport, that doesn’t exactly seem like a problem for someone with connections to terrorist groups does it? Those organizations have tremendous resources.

Armour said Tounisi had about 30 supporters that had pooled their resources to come up with $1,200 for bail.

Remember that part I asked above about the father? Well low and behold, Assistant U.S. Attorney William Ridgway argued that the evidence indicated that not one of the adults in Tounisi’s life could dissuade him from engaging in violent jihad, including his father.

In fact, one family member recalled how Tounisi, even though he hoped to die a martyr in Syria, was told he would not.

According to Ridgway, the relative told Tounisi, “You will die like roadkill.”

“One would have hoped this chapter would have ended,” said Ridgway. “It didn’t.”

His resources were exposed by Ridgway as well. Despite the lack of finances, he was able to purchase an $850 plane ticket to Turkey to meet the handler that would help him cross the border into Syria.

Perhaps it’s time this judge was relieved of his position for making incompetent decisions such as this, but then again, it is Chicago.