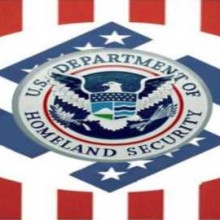 Julia Davis, a former Customs and Border Protections Officer, was falsely declared a domestic terrorist and subjected to retaliatory efforts against her by the Department of Homeland Security. Her home was raided by a 27 man “special response team.” She was twice falsely arrested and imprisoned, but later exonerated. She is now a national security expert and has put out a historical documentary titled Top Priority: The Terror Within. She claims that the War On Terror by the Department of Homeland Security is a charade and that the agency seems to be targeting concerned American patriots.

Davis says her documentary is about her time with DHS in dealing with applicants from countries with ties to terrorism, who are seeking to come into the United States.

She says that they had “very specific alerts” that on July 4, 2004 that members of Al-Qaeda would be attempting to cross the border from Mexico into the US. The land port where Ms. Davis worked is the largest and busiest land port in the world, San Ysidro Port. She says that Islamic clerics say this is the best place to breech the US border because of the large number of people coming through.

But it goes further. Davis says that none of these people were subjected to routine checks that were in place for applicants from terrorist countries. According to Davis, “They were supposed to be fingerprinted. They were supposed to be asked why they left the US, why they were coming back, where they were living… all these different procedures that would have taken approximately an hour for each person. None of it was done.”

In fact, in some of the cases, the individuals didn’t fill out the paperwork or provide the documents they were supposed to in order to come into the United States.

Davis indicated that the Port Director was not informed about the situation and that when she went higher up to Intel and she said she “nearly fell down” when she found a “closed door.” The entire Intel office was “given the day off so that they could Bar-B-Q on the Fourth of July.” Ultimately there was no one that she could report her findings to. Coincidence? I think not.

The Port Director wasn’t worried either. He simply told her to put it in their box and they would get to it when they had opportunity. This was in direct opposition to what their manual stated was to happen, according to Ms. Davis. They were to get the information to a joint terrorism task force.

That night, since she was no longer under the Port Director’s orders, she contacted the FBI to inform them of the situation. In her mind, she was simply being patriotic and informing people who should be able to use the information to deal with a very real threat. She simply wanted to make sure that while others were barbequing that nothing was going to be blown up in the United States.

From that time on, every day when she came to work she was being investigated for one thing or another. She says everything they brought up to here was frivolous and ridiculous and she believes it was an attempt to get her fired to discredit anything she would say. All of this was because the FBI knew the information and DHS was embarrassed that the information came to them the way it did.

Within a period of two weeks, Davis was the subject of 19 investigations. By the time she sued Homeland Security there had been 54 investigations! On top of that, she was declared a domestic terrorist! My fellow Americans, this is a woman that sought to ensure the safety of our border! She was vigilant at her job and according to what she is saying, our government, if the allegations are true, has acted not only negligently against the American people, but criminally against her.

Davis’ home was raided by a 27 man SWAT team in a Blackhawk helicopter. She said they spent more time and utilized more man power raiding her home without a warrant than the government used to raid the alleged compound of Osama bin Laden.

Davis believes that no one dealt with the issue she brought forward because either they were derelict of duty or, more likely, there was corruption. She said that the Customs Department is historically one of the most corrupt agencies, especially the land port where she worked. In fact, she said that her border crossing had a Port Director who was caught taking bribes to allow people to come across. She also said there were intel reports that came up later which indicated that Arab nationals were offering $5,000 per person to allow individuals across the border without facing any scrutiny.

When asked what she thought about DHS and their priorities, Davis said:

Since the release of her film, their Fleur De Lis (the producer of the film) family stores have been raided by DHS and they are under continual surveillance. She also has a number of electronic interruptions as well. The Internal Revenue Service (IRS) audited them along with their attorneys who assisted her as she prevailed against DHS.

There is more in the video, which you will want to see. However, even after she is exonerated, DHS continues to hound her. This is not freedom. This is not liberty. This is not justice. This is the face of tyranny and yes, it’s here in the US.

Watch the trailer of Top Priority: The Terror Within below: