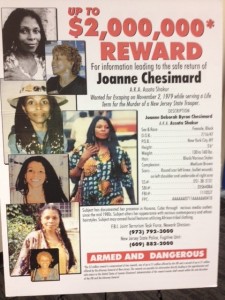 There has been a lot in the news the last two days about Joanne Deborah Chesimard who is the first woman ever placed on the “FBI Most Wanted Terrorists” list. Joanne’s connections with the Weather Underground and Obama mentor Bill Ayers have been much publicized. Rather than beat that story into the ground I thought I would take a moment to make a point that fails to be made often enough.

With all the constant rhetoric about the dangers of the American Patriot and right-wing-Christian terrorists, the facts still remain. The current list of “FBI Most Wanted Terrorists” contains 32 people. 30 of those people are Muslims and two are left-wing liberals. In addition to Chesimard, Daniel Andreas San Diego is the other non-Muslim on the list.

Who is San Diego? He is an animal rights activist who is accused of involvement in two San Francisco bombings.

Below is a full list of “FBI Most Wanted Terrorists” that can be found at FBI.gov. We must always embrace the truth. Notwithstanding sick individuals like Timothy McVeigh, there is zero evidence that American Patriots are a greater terrorist risk than other groups. This is all about a leftist agenda and when someone brings up the conversation you should point them to this list. Don’t be afraid to openly discuss the fact that most or all the recent mass shooters have been perpetrated by left-leaning criminals as well. I am not necessarily trying to blame the left today but, more so, trying to expose the truth and show that there is little to no reason to suspect that terrorists are going to start springing from right-wing ideologies. Bad people are bad people no matter how they worship or what candidate they vote for. Here’s the current “FBI Most Wanted Terrorists” list: