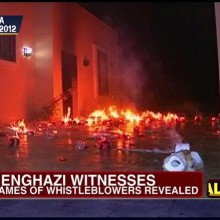 Fox News reports this morning that the names of Benghazi whistleblowers, who have been kept secret, known only to a handful of House lawmakers and their staff, have finally been revealed. These men are set to testify before a congressional hearing on Wednesday.

Those that will appear before the House Oversight and Government Reform Committee will include the following:

Nordstrom previously testified before the oversight committee, which is chaired by Rep. Darrell Issa, R-Calif., in October 2012. At that time, Nordstrom made headlines by detailing for lawmakers the series of requests that he, Ambassador Stevens, and others made for enhanced security at the U.S. consulate in Benghazi, most of which were rejected by State Department superiors.

Rep. Jason Chaffetz, a Utah Republican and committee member, said Hicks was in Tripoli at 9:40 p.m. local time when he received one of Stevens’ earliest phone calls amid the crisis.

Chaffetz, who subsequently debriefed Hicks, also said the deputy “immediately called into Washington to trigger all the mechanisms” for an inter-agency response.

“The real-life trauma that [Hicks] went through,” Chaffetz recalled to Fox News’ Greta Van Susteren, “I mean, I really felt it in his voice. It was hard to listen to. He’s gone through a lot, but he did a great job.”

All of this comes on the heels of threats against whistleblowers in the investigation, calls by Chairman Darrell Issa (R-CA) to make sure the whistleblowers’ attorneys have the proper security clearance to review classified documents, and the revelation by one whistleblower that claims the United States, specifically the Obama administration, knows exactly who is responsible for the attack on Benghazi, but won’t do anything because they “don’t want to upset anybody.”

Congressman Issa has vowed to expose senior officials’ involvement in the Benghazi scandal and hold them accountable.

Well now the cat is out of the bag and this week we may just get the real story from those on the ground there, who have been silenced and intimidated by the Obama administration. Frankly, I’m looking forward to the hearings next week. They should be watched by all Americans, at least as much as possible, and then we should let our voices be heard in Washington concerning the testimony.