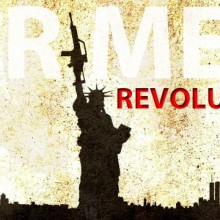 But when a long train of abuses and usurpations, pursuing invariably the same Object, evinces a design to reduce them under absolute Despotism, it is their right, it is their duty, to throw off such Government, and to provide new Guards for their future security.

According to a survey that has been put out by Fairleigh Dickinson University, nearly one third of voters believe an “armed revolution” might be needed in the next few years in order to protect liberty in the United States.

This survey, titled Beliefs About Sandy Hook Cover-Up, Coming Revolution Underlie Divide On Gun Control, indicated that Nearly three-quarters (73%) of Democrats say that Congress needs to pass new laws to protect the public from gun violence, but the views of Republicans are almost completely opposite: 65 percent don’t think new laws are necessary. Overall, registered voters are divided over the need for new gun control legislation. Fifty percent agree it is needed, with 39 percent who disagree.

Obviously there is quite a difference of opinion among voters about the role of guns in society, though the gun control advocates really are on the wrong side of the Second Amendment. However, this same poll found that 29 percent of Americans think that an armed revolution will be necessary within the next few years in order to protect the liberties, which are supposed to be protected under the US Constitution and upheld by those that swear an oath to support and defend it, but are failing to do so.

These beliefs fall along party lines as well. Only 18 percent of Democrats believe an armed revolution may be necessary, as opposed to 44 percent of Republicans and 27 percent of independents. Still, those numbers fall close to the same numbers that were present during the War for Independence. Historians have estimated that approximately 40 to 45 percent of the colonists supported Independence from Great Britain, while 15 to 20 percent remained loyal to the Crown. The remainder attempted to be neutral, until they had no other alternative.

Only 38 percent of Americans who believe a revolution might be necessary support additional gun control legislation, compared with 62 percent of those who don’t think an armed revolt will be needed.

“The differences in views of gun legislation are really a function of differences in what people believe guns are for,” said Dan Cassino, a professor of political science at Fairleigh Dickinson, and an analyst for the poll. “If you truly believe an armed revolution is possible in the near future, you need weapons and you’re going to be wary about government efforts to take them away.”

Cassino also said regarding bipartisan support for gun control, “If there was a bipartisan moment after Sandy Hook to pass gun control legislation, it’s past. Partisan views have strongly re-asserted themselves, and there’s no sign that they’ll get any weaker.”

Amazingly there is thirty-seven percent of Americans who believe that Sandy Hook was a complete enactment in order to push gun control debate while 59 percent of Americans do not believe there was a conspiracy in Newtown, Connecticut. I had questions and I got answers. In fact, I’ve had so many people, who are normally the ones blasting the mainstream media, pointing the finger at NBC and the Today show claiming they were saying something different than came from the Connecticut State Police. I suppose now we should lend credibility to NBC? Not necessarily.

While I don’t really trust the Federal government, I don’t believe the Sandy Hook shooting was a conspiracy. I simply believe the degenerates who are hell bent to disarm Americans and take every opportunity to advance their control agenda against gun owners, simply exploited a tragic event in order to push that agenda. It didn’t work. They fell flat on their collective faces.

That doesn’t mean they aren’t going to be coming back with more gun legislation. They most certainly are going to do that and have said so.

This leads me to a conclusion regarding an armed revolution. I truly believe the next step for the states is to begin secession. I think it will not be long until that become a reality. We’ve already seen petitions signed by citizens for every state in the Union and we know the White House’s response to that sentiment.

I’m not a prophet or the son of a prophet. However, I look to 1774-1776 and the years running up to the War of Northern Aggression and I see a pattern. I side with those that do see an armed resistance in our future, but I am always hopeful that we might be able to secede peacefully. The only aggressors in a matter like thatwould be our creature, the Federal government. Should they attempt to invade a peacefully seceded state, I would hope we would have learned a lesson and that we would stop Union troops at the borders of our state should they attempt such a measure, as they did in South Carolina under President Abraham Lincoln. As always, I believe we should seem a peaceful resolution and secession would be that means. States could then band together like we were, prior to the Constitution, under the Articles of Confederation which allowed full local government in the state as an individual country.