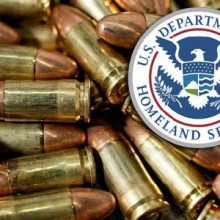 As I pointed out to you before, the Department of Homeland Security had nearly 264 million rounds of ammunition in their inventory at the beginning of Fiscal Year 2013. DHS also had roughly $37 million of taxpayer money to spend on ammunition as well. Though they have claimed that the Sequester has cut into their budget so much that they were releasing felons into the population, they continue their search for millions of rounds of ammunition, but this ammunition is specifically designed for the range.

Following the solicitations of over 1.6 billion rounds of ammunition last year, “Big Sis” has put out a new request for ammunition. This time they are looking for frangible ammunition. This type of ammunition is designed to “disintegrate into tiny particles upon impact to minimize their penetration for reasons of range safety, to limit environmental impact, or to limit the danger behind the intended target.”

According to Global Security, “Frangible ammunition represents the first viable revolutionary change to firearms science in the past 100 years. Frangible ammunition is a relatively recent development in bullets, presenting a departure from the standard projectiles in use for both range shooting and personal protection. With the advent of modern hostage rescue tactics in the 1970s and 1980s, the military and police agencies began to look for ways to minimize over penetration risks. One widely-accepted solution was the frangible round, also known as the AET (Advanced Energy Transfer) round.”

DHS’ solicitation refers to the frangible ammo as “reduced hazard training ammunition.” According to solicitation number HSFLGL-RFI-00056, DHS is requesting the following:

DHS also wants to know just how fast these manufacturers can turn out this ammunition. For instance, they as the following questions:

You can read about the differences of terminal ballistics between frangible rounds and others here. Most people commenting on the frangible rounds say they would not use them, though there are exceptions of those that would use them in a home defense setting.

The problem is that with budget tightening, is the purchase of frangible ammunition frugal? The answer is both yes and no. It is more expensive than full metal jacket ammo, but usually less expensive than defense ammunition (hollow points). They are also considered to be safer, as they are designed to be “lead free,” and additionally, as the video below indicates, the user can recycle the copper and recoup some of the money spent on the ammunition.

Could these be used away from the range? Of course, but experts say they are used for scenarios where you don’t want over penetration.

This switch to frangible ammunition is interesting in light of the fact that the Government Accountability Office is “just getting underway” with an investigation on DHS ammo purchases. USNews reports:

The congressional investigative agency is jumping into the fray just as legislation was introduced in both the Senate and the House to restrict the purchase of ammo by some government agencies (except the Department of Defense). The AMMO Act, introduced Friday, would prevent agencies from buying more ammunition if “stockpiles” are greater than what they were in previous administrations.

Donelle Harder, a spokeswoman for Sen. Jim Inhofe, R-Okla., who introduced the legislation in the Senate, tells Whispers the bill would also require GAO to share the findings of its report on DHS purchases with Congress.

Officials at DHS have denied to both Whispers and lawmakers that it is stockpiling ammunition. The Associated Press reported in February that DHS wanted to buy more than 1.6 billion rounds of ammunition, but DHS officials testified last week it was only planning to buy up to 750 million.