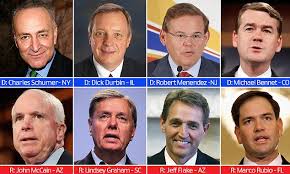 9/11 hijackers could qualify for legalization

WASHINGTON, May 6, 2013 /PRNewswire-USNewswire/ — A thorough analysis of the Gang of Eight bill’s enforcement and compliance provisions by the Center for Immigration Studies finds serious flaws which will have public safety, national security, and enforcement implications. The extent of the problem is often hidden by S.744’s deceptive language; it contains misleading subtitles which mask the rewards and protection given to lawbreakers. Because the bill excuses nearly all forms of immigration and identity fraud for amnesty applicants, the proposed legislation compromises the integrity of our immigration system.

A detailed analysis, including an extensive table citing the relevant sections of the bill, is at:http://cis.org/vaughan/senate-bill-rewards-protects-lawbreakers-undermines-law-enforcement.

“The problems in the Schumer-Rubio bill are so extensive that it is difficult to imagine that an abbreviated mark up or amendment process would be sufficient to reduce its impact on public safety and national security,” said Jessica Vaughan , Director of Policy Studies at the Center. “The passage of narrowly focused bills allowing for more input from law enforcement agencies would be more prudent and help ensure that we don’t create the conditions for another terrorist attack or allow more foreign gangs and criminal organizations to gain a larger foothold in our communities.”

View the Senate bill, and CIS analysis, testimony, and commentary on the bill, at: http://www.cis.org/Border-Security-Economic-Opportunity-Immigration-Modernization-Act.