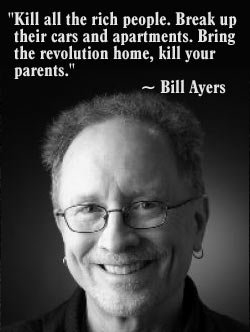 One of Obama’s mentors, domestic terrorist Bill Ayers, spoke at the annual commemoration of the Kent State shootings over the weekend and sought to justify his domestic terrorism from the 60′s and 70′s when he and his terrorist group, Weather Underground, engaged in bombings of New York City Police Headquarters in 1970, of the Capitol building in 1971, and the Pentagon in 1972. Ayers said that to compare his bombings to that of those at the Boston Marthon was not fair. “Just because they use the same thing, there’s no relationship at all,” Ayers said.

“There’s no equivalence,” he said. “Property damage. That’s what we did.”

“How different is the shooting in Connecticut from shooting at a hunting range?” Ayers said. “Just because they use the same thing, there’s no relationship at all.”

Ayers speaks as if it was OK to destroy property. He seeks to justify his criminal behavior here and yet was the keynote speaker at the event. 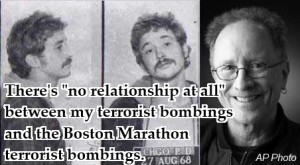 He did mention that in 1970, Ayers’ then-girlfriend Diana Oughton, along with Weatherman members Terry Robbins and Ted Gold, were killed when a bomb they were constructing exploded unexpectedly. That bomb had been intended for detonation at a dance that was to be attended by hundreds of Army soldiers at Fort Dix, New Jersey. Ayers himself attested that the bomb would have done serious damage, “tearing through windows and walls and, yes, people too.”

So Ayers’ hands are not clean in the matter. He had murderous intentions, just as those who detonated the bombs in Boston did.

In fact, he was a fugitive running from the FBI, along with his then girlfriend Bernardine Dohrn. They finally surrendered in 1980, but all charges were dropped due to an “improper surveillance” technicality. Apparently a warrant had not been issued for some of the surveillance. It’s interesting how far we’ve come, in America.

At that time Ayers commented on his apparent good fortune, “Guilty as sin, free as a bird. America is a great country.”

The United States is the most violent country that has ever been created, Ayers said.

U.S. Sen. John McCain, R-Ariz., committed daily war crimes in Vietnam “and I get asked about violence when what I did was some destruction of property to issue a scream and cry against an illegal war in which 6,000 people a week are being killed,” Ayers said. “Six thousand a week being killed and I destroyed some property. Show me the equivalence. You should ask John McCain that question … I’m against violence.”

This was the first time Ayers has participated in the annual memorial that in part honors the memory of the four students killed: Allison Krause, Jeffrey Miller, Sandra Scheuer and William Schroeder. Nine other students were wounded in a protest against the war and the Guard on campus. The ceremonies also marked the dedication of the May 4 Visitor Center on campus

Ayers said his wife, Bernardine Dorhn, also a prominent former member of the Weather Underground and now a Northwestern University law professor, spoke several years ago at a Kent State May 4 commemoration.

“My message to young people is the same again and again, I don’t believe in the myth of the ’60s. That’s all marketing,” Ayers said. “I’m a person of this generation. We’re all inter-generational people. … What I think is, we have a hard moral responsibility to look at the world as it is, to open our eyes, to be astonished at both the beauty of the world and the unnecessary suffering we visit on the world. And then to act. I’m an activist. I have been since I was 20 years old. And activists are people who remind us that when the town crier says all is well, all is not well.”

Well, just where is that “hard moral responsibility” when you are determining to not only blow up property, but you have the premeditated thought process of murdering scores of America’s Armed Forces that have done nothing to you?

While I’m no fan of Senator John McCain (R-AZ), I believe Ayers’ comments about him, as he tried to whitewash the fact that his terrorist organization were intent on murdering innocent Americans, are despicable. “No one knows for sure but I think they were. And had they carried it out it would have been a catastrophe,” Ayers said. “But they didn’t and it didn’t happen. But what did happen is, on that same day John McCain murdered civilians. Do we have any responsibility for that? Should there be any reconciliation for that? Should he tell the truth about it?”

Ayers is believed to have written Barack Obama’s 1995 fictitious memoir Dreams from My Father, according to evidence. Perhaps his ties in Chicago is what kept him out of prison, got him a lofty job as a university professor and even got him into the White House.

Ayers hates America with a passion only someone like Barack Obama could appreciate. “What a country. It makes me want to puke,” he said in 2001.

I think I could say the very same thing about Bill Ayers.