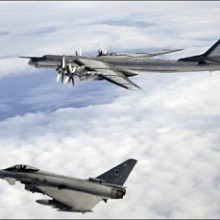 According to defense and military officials, strategic bombers from Russia flew within the defense zone close to northern Alaska and the Aleutian Islands last week.

Two Bear H nuclear-capable bombers were detected flying into the military’s Alaska Air Defense Identification Zone (ADIZ) near the Aleutians, where a strategic missile defense radar is located, and Alaska’s North Slope region by the Arctic and Chukchi Seas on April 28 and 29, military officials told the Washington Free Beacon.

Lt. Cmdr. Bill Lewis, a spokesman with the U.S. Northern Command, confirmed the fighter intercept of the latest bomber incursion but declined to provide details.

“Two U.S. F-22′s from Elmendorf Air Force Base, Alaska, were launched and visually identified Russian aircraft on the night of April 28, as the Russian Air Force flew standard out of area flights near Alaska,” Lewis said.

The bombers did not enter U.S. airspace, he said.

However, the Alaska ADIZ is a formal national security zone used by the military to monitor both civilian and military aircraft. The dispatch of F-22s is an indication the bomber flights posed a potential threat to U.S. territory.

Back in February, I reported that two Russian Bear bombers circled the U.S. territory of Guam, which is a key U.S. military hub in the Pacific.

While the current panderer-in-chief is set to make concessions to the Russians on missile defenses, just two days after this incident Northern Command announced issued a press release that it would be cooperating with Russian military in implementing plans for a joint U.S.-Russian flight exercise that would be designed to counter hijacked aircraft.

“The VIGILANT EAGLE exercise series has been an extraordinary and historic opportunity for NORAD and the Russian Federation to coordinate on the response to a mutually acknowledged hijacking threat,” said Joe Bonnet, Director of Joint Training and Exercises for NORAD and U.S. Northern Command. “From a participant’s perspective, it is more than a military exercise; it is creating lasting bonds and partnerships extremely valuable for the security of our nations.”

“This year’s exercise will continue building and strengthening the cooperation and partnership established between the two countries,” the statement reads.

To me this has to be one of the stupidest things to do. In fact, it’s next to the stupid ideas we have about bringing foreign troops on our soil to engage in counter terrorism training or training Afghan police officers. All the while we are teaching them exactly how we do things. They are not teaching us how they do things. In fact, it seems not only stupid to me, but incredibly foolish.

Others have a problem with the way the Obama administration is working with the Russians as well.

“The Russians continue to play the administration like a fiddle, sending signals that they still have a strategic air force and can project power while the U.S. continues to ground alert squadrons and unilateral disarms,” said retired Air Force Lt. Gen. Tom McInerney, a former Alaska Ari Command commander.

“Is this the administration’s idea of ‘reset relations’ with Russia?” he asked.

Back in April McInerney said, “Russia continues to conduct aggressive offensive missile training in the Pacific against U.S. and Allied Forces.”

“We should understand that they look at ‘reset’ differently than we do,” said the retired three-star general. “They look at it as regaining their previous USSR position as a superpower while this administration is moving towards unilateral disarmament.”

Retired Air Force Lt. Gen. Trey Obering, a former director of the Missile Defense Agency (MDA), who has since left government, said that he has continued to take part in talks with the Russians on missile defense cooperation in much the same manner as he did previously.

Last month he told the Beacon, “These efforts were met with Russian intransigence. The Russian opposition and now simulated attacks “means to me that there is no way the Russians want to cooperate on missile defense in any meaningful way. We should not be conceding anything to the Russians. We should be pursuing our national security interests to defend this country and our allies.”

In other words, Obering believes Moscow will not be cooperating in any meaningful way with the United States. What a surprise, not!

The US should be looking after her own interests, not making concessions with the former Soviet Union.