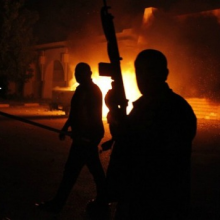 More is coming to light surrounding one of the biggest scandals of the Obama administration as Benghazi whistleblowers prepare to testify before Congress this week. According to CBS News, Benghazi witness Greg Hicks informed congressional investigators that “a team of Special Forces prepared to fly from Tripoli to Benghazi during the Sept. 11, 2012 attacks was forbidden from doing so by U.S. Special Operations Command South Africa.”

“I believe if we had been able to scramble a fighter or aircraft or two over Benghazi as quickly as possible after the attack commenced, I believe there would not have been a mortar attack on the annex in the morning because I believe the Libyans would have split. They would have been scared to death that we would have gotten a laser on them and killed them,” Hicks testified.

The account from Gregory Hicks is in stark contrast to assertions from the Obama administration, which insisted that nobody was ever told to stand down and that all available resources were utilized. Hicks gave private testimony to congressional investigators last month in advance of his upcoming appearance at a congressional hearing Wednesday.

According to excerpts released Monday, Hicks told investigators that SOCAFRICA commander Lt. Col. Gibson and his team were on their way to board a C-130 from Tripoli for Benghazi prior to an attack on a second U.S. compound “when [Col. Gibson] got a phone call from SOCAFRICA which said, ‘you can’t go now, you don’t have the authority to go now.’ And so they missed the flight … They were told not to board the flight, so they missed it.”

Obama administration officials have insisted that no military resources could have made it in time. A White House official told CBS News that, at the start of the attack, Chairman of the Joint Chiefs Martin Dempsey and Defense Secretary Leon Panetta “looked at available options, and the ones we exercised had our military forces arrive in less than 24 hours, well ahead of timelines laid out in established policies.”

The following is an excerpt from Hicks’ April congressional testimony which was released from the House Oversight Committee.

Q: But do you think, you know, if an F-15, if the military had allowed a jet to go fly over, that it might have prevented [the second attack]?

A: Yeah, and if we had gotten clearance from the Libyan military for an American plane to fly over Libyan airspace. The Libyans that I talked to and the Libyans and other Americans who were involved in the war have told me also that Libyan revolutionaries were very cognizant of the impact that American and NATO airpower had with respect to their victory. They are under no illusions that American and NATO airpower won that war for them. And so, in my personal opinion, a fast-mover flying over Benghazi at some point, you know, as soon as possible might very well have prevented some of the bad things that happened that night.

Q: The theory being, the folks on the ground that are doing these — committing these terrorist attacks look up, see a heavy duty airplane above, and decide to hightail it?

A: I believe that if — I believe if we had been able to scramble a fighter or aircraft or two over Benghazi as quickly as possible after the attack commenced, I believe there would not have been a mortar attack on the annex in the morning because I believe the Libyans would have split. They would have been scared to death that we would have gotten a laser on them and killed them.

Q: I just wanted to ask, you mentioned permission from the Libyans. Why is that important? What did you mean by that?

A: Well, it’s their country. And for an American military aircraft to fly over their country, we have to have permission from them to do so.

A: We would have certainly wanted to obtain that permission. I believe we would have gotten it if we had asked. I believe that the Libyans were hoping that we were going to come bail them out of this mess. And, you know, they were as surprised as we were that American — the military forces that did arrive only arrived on the evening of September 12. Yeah.

While this would not have saved Chris Stevens of Sean Smith, it would have probably saved the lives of Tyrone woods and Glen Doherty who were waiting on support that never arrived.

Q: Now, at this point, are you having communications with Washington?

Q: What was the rationale that you were given that they couldn’t go, ultimately?

A: I guess they just didn’t have the right authority from the right.

Hicks indicates that there was not a denial from Libya to allow US armed aircraft, but rather that the Libyans would have been willing, but they were never asked. This is contradictory to the Obama administration’s claims.