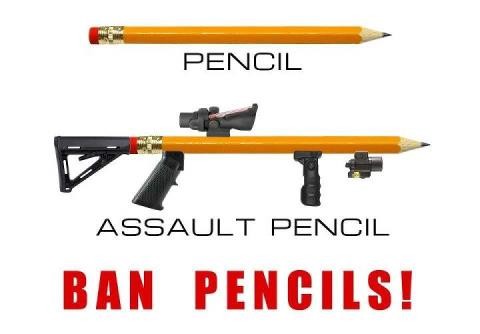 “A pencil is a weapon when it is pointed at someone in a threatening way and gun noises are made.” -Bethanne Bradshaw, spokesperson for Suffolk, VA Public Schools

Just when you think you have heard it all…you haven’t heard anything yet. Seven-year-old Christopher Marshall was playing with a classmate and ended up getting suspended for using a pencil as a make-shift, make-believe gun.

A Suffolk school suspended a second grader for pointing a pencil at another student and making gun noises.

Seven-year-old Christopher Marshall says he was playing with another student in class Friday, when the teacher at Driver Elementary asked them to stop pointing pencils at each other.

“When I asked him about it, he said, ‘Well I was being a Marine and the other guy was being a bad guy,'” said Paul Marshall, the boy’s father. “It’s as simple as that.”

Christopher’s father was a Marine for many years. He thinks school leaders overreacted.

“A pencil is a weapon when it is pointed at someone in a threatening way and gun noises are made,” said Bethanne Bradshaw, a spokesperson for Suffolk Public Schools.

The Suffolk school system has a “zero tolerance policy” when it comes to weapons. And, Bradshaw admits, that policy has tightened up in recent years because of widely publicized school shootings.

“Some children would consider it threatening, who are scared about shootings in schools or shootings in the community,” said Bradshaw. “Kids don’t think about ‘Cowboys and Indians’ anymore, they think about drive-by shootings and murders and everything they see on television news every day.”

But Christopher’s parents say school administrators failed to use common sense. Christopher has good grades and no history of being disruptive in class. They pointed out a line on the suspension notice, where the teacher wrote, “I told him to stop and he did.”

“Enough is enough,” said Paul Marshall. “I see it as the tail is now wagging the dog.”

And while Christopher can play freely at home, he says he won’t pretend to play with guns at school in the future.

According to school policy, suspensions can last up to 10 days. Christopher will only be home for two. The school makes that determination based on the situation, the student’s age and behavioral history.

I remember when pretending to be a Marine was an acceptable thing. This liberal agenda has gone way too far. When I was a kid we still played “Cowboys and Indians” and today playing Cattlehands (no sexism allowed of course) and Native Americans is sure to get you a big fat suspension from thousands of schools across the country.

Sometimes facts are stranger than fiction and this is one of those times. The one redeeming factor in all of this is that the pencil was not construed to be an “assault” pencil. If it were then young Christopher might be on his way to a juvenile detention center as we speak.

This is the new America and I, for one, would like my country back.