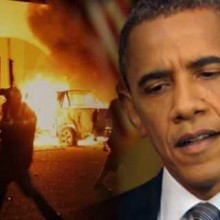 Just think of what the fall of Barack Hussein Obama would do. It would drop good old Uncle Joe Biden into the chair of President, a man whom some wonder if maybe he has Alzheimer’s or something like that. Sometimes he comes off the wall, while at other times he seems to be discussing things by himself. However, we should now cast our sights back to September 11, 2012, a day that all but a few felt like our nation was once again being attacked by terrorists. Yet, the people from Obama on down ignored what was going on that fateful day. Obama went to bed while Americans were under attack by Muslims. Obama awoke the next morning like nothing had happened and flew off to do a campaign speech in Las Vegas. Obama did not stay at the White House finding out just why our ambassador and other Americans were attacked.

Now to most this would seem like rehashing old problems, but it is one that bears direct and constant indulgence to bring forth the truth.

Can anyone remember that night when some stations broke in, reporting that our ambassador in Benghazi was under attack? We knew nearly right away that it was not because of some YouTube video. No sir, most people that lived through the 9-11 attacks on the Twin Towers knew what was going on.

Yet, Secretary of State Hillary Clinton, Barack Obama, and nearly all the top players for the upcoming “reelection” did not want this being characterized as a terrorist attack. Now why would these people at the top not want people to know the truth about what took place in Benghazi? It is mainly due to the fact that Obama had stated many times that the very people that attacked Benghazi were on the run and all but wiped out. We had nothing to fear from them, and oh yea, it was election year so we could not have a terrorist attack, especially since it was Obama who was running cover for the terrorists who engaged in the attack on Benghazi. If you don’t believe that, just ask Obama, he will gladly tell you that Al-Qaeda is not around and they had nothing to do with the Benghazi attack.

Go back to the night of September 11, 2012, about 6 PM Central time. The first wave of terrorists probed where Ambassador Chris Stevens was at in Benghazi. They attacked it around that time and higher ups were made aware of this, as can be now seen from the few reports coming from people that may now face imprisonment from Obama because they are now giving the truth about Benghazi to the world. It was a probe to feel out the defense of the office where Stevens was at. If they had met a serious resistance, that would have been the end of that, but the probes kept coming harder and harder until some 7 hours later 4 men had lost their lives; four men who did not have to die, but for a very serious election campaign they would be sacrificed. This should get under the skin of all the real reporters and Americans. It should fester like a bad infection until the truth is widely known and those who allowed this terrible injustice be held accountable.

Yet, we doubt that many in the lame stream media will go after anyone that had anything at all to do with the murder of those 4 men, because that was what it was. It should be classified that way because had the White House done the job it was supposed to do, a group of special forces from Tripoli would have been on the ground repelling those attacks and making sure that those men and others were out of harm’s way. Instead, the truth was ignored. It was far more flamboyant to say that the attack was due to a YouTube video than to admit that it was a real terrorists attack which occurred on the very day of the anniversary of 9-11.

Now, after some 7 months of questions and wondering, some people have found it much more relevant to tell the truth than to hide behind a false leader.

Yes, this could well be Obama’s fall. Much like Richard Nixon, back in the day, Obama cannot keep this lie hidden any longer and the truth is about to be revealed, but will it even matter now or has the United States, the news media and even the people in Washington, D.C. all lost their backbone to do what is right? Will they just allow Obama to “radically change” the very ideas of what the United States was built upon? We sure hope and pray that the people will see this action taken by the President and his followers to save an election, by being willing accomplices in the deaths of 4 men just so they could continue in their seats of power after the 2012 election.

Perhaps we are wrong and what is revealed this coming Wednesday will show something very different. We doubt that since we have also now heard through a few sources that Obama has sent letters to certain people, informing them that if they did not do as he wished, they would be held to a much stronger line than ever before; in other words, Chicago politics at its worst!

Benghazi is just the tip of a huge iceberg with Obama at the top and a bunch of shivering little people below. This iceberg is known as SOCIALISM and if “WE THE PEOPLE” sit back and just allow this thing to stay, we all lose and it will not be just money, but the very freedom we all love so dearly.