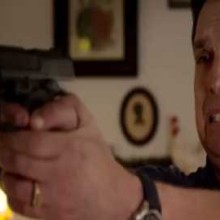 Brian Lockerman, owner of MB Studio Productions, has put together a dramatized video in which he makes the case for why American citizens need high capacity magazines for their firearms. While I believe the Second Amendment makes it abundantly clear that our arms are for the preservation of a free state, I also believe Lockerman’s video demonstrates why high capacity magazines are needed even in the defense of your own home. After all, sometimes the bad guys don’t come alone. Warning: Language, violence and drug use in video.

Mr. Lockerman’s video begins by letting everyone know that more of these videos are on the way to demonstrate just who the gun control laws affect and why they don’t work.

Lockerman’s video depicts an American family sitting at home together in their living room as two degenerates drive through their neighborhood getting high and spotting their next house to target.

While the first bad guy knocks at the door, the second criminal seems to move toward the back of the house. The father notices that bad guy number one has a gun in his hand as he claims that his truck is out of gas and he needs to use the phone.

The father goes to his gun safe and retrieves his handgun as he tells his wife to call 911, which by the way, holds less than ten rounds, just like Dianne Feinstein and other gun grabbers want. As soon as he has the gun in hand the bed guy kicks in the door and starts toward him. The father opens fire, shooting the bad guy numerous times. He falls down, presumably mortally wounded.

Bad guy two enters the picture and the father gets off one shot that hits him low. His gun is empty.

The next scene is a flash of gun fire, which the viewer sees through the window and then the woman’s hand falls to the floor as the voice of a 911 operator emanates from her cell phone informing her that the police are on their way.

The video concludes, “Because your government decided how many rounds you need to protect your family.”

Friends, this is a powerful video to make the point of high capacity magazines.

“I am passionate about protecting our Second Amendment rights because I know this is the right that protects all other rights,” Lockerman states on an MB website. “I am not going to tell you that you have to own a gun. It’s not for everyone. But the push to take away the individual freedom and Second Amendment right to keep and bear arms is rooted in fear and misunderstanding.”

“Your constitutional rights are threatened because anti-gun people seem to defy all reason and sanity with their beliefs and fears,” he continues. “Most of them have been taught literally zero about guns, have never held one in their hands and are terrified by the thought of them. We can’t approach this perception problem by simply telling our pro-self-protection, pro-gun side of the story.”

Mr. Lockerman has a similar vision as Dr. Ignatius Piazza of Front Sight and that is to change the face of gun ownership in America. He believes that gun owners are and should be safe, law-abiding, and well trained.

Also, enjoy a trailer for his new show, Shoot To Thrill, which I’m sure many of you in this audience will love and want to support.

[youtube]http://youtu.be/G7K57FF7az0[/youtube]
Tim Brown is the Editor of Freedom Outpost and a regular contributor to The D.C. Clothesline.