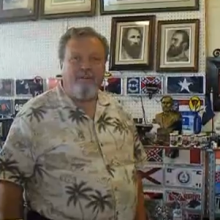 I spoke with Tim Manning, a popular Southern Nationalist and Christian pastor from Greensboro, North Carolina, over the weekend. Mr. Manning’s home was raided late Wednesday evening into early Thursday morning. According to Manning, the raid consisted of at least one police officer from Kernersville Police Department with a Department of Homeland Security vest, along with 6 to 10 or more law enforcement officers in heavy body armor. Mr. Manning says they confiscated “$25-30,000 worth of my handguns, all in absolutely new condition some worth $2,000+ each.”

The reason for the raid was due to charges brought against his son, Christopher, who lives with his father and is a licensed bail bondsman. The charges are that Christopher committed assault by pointing a gun and impersonated a law enforcement officer.

The raid authorized by the North Carolina Department of Insurance, which Manning won a case against just a couple of years ago.

According to documents Freedom Outpost obtained from the Forsyth County Courthouse, Manning was accused of pointing a gun at two young boys and identifying himself as a law enforcement officer. Freedom Outpost contacted Tyler Troxler’s father, Jeff, who confirmed the accusations. Tyler is the boy who referred the allegations to his father, who then called authorities.

We also contacted Mr. Manning’s father, Tim, and spoke with him at length. According to Mr. Manning, Christopher and another agent were on private property and the owner of the property had told them that if they saw anyone on the property to run them off. Christopher and his partner saw the two boys on the property playing with airsoft rifles. Manning then drew his weapon and had it in the alert position as he approached the boys. The boys were trespassing on private property. He was also wearing his badge. As soon as he could determine they were airsoft rifles, he holstered his weapons and told the boys they should leave the property, which they politely did. So how did the raid go down? According to Tim Manning, who posted just hours after the incident on Facebook:

They busted-in my front door of this $300,000+ home and busted-in a set of rear French doors. Then they set a diversionary explosive grenade in my entrance hallway. I had gone too (sic) the top of the stairs to see what was happening at my front door. They did not announce themselves. When the explosive went off I got flat on the second floor carpet seeing that there were too many people here to successfully resist. The noise was so close I thought I had been shot. I was only about 10 feet away from the device. It blew pictures off of my walls, broke glass inside of the house and blew my heating and air controls off of the wall in the hall and blew on of the batteries into the kitchen. The house is a wreck.

I am much overweight and they forced me to lie on my stomach on the floor for over 30 minutes. My physician has said to not rest on my stomach since it puts unnecessary (sic) pressure on my heart. I sleep on my back. I was then handcuffed and was not permitted to witness the search or use my cell phone. My knee and my back are now in much pain. I do not have the money for a trip to the ER and will phone my doctor tomorrow and find a chiropractor. My left and right knee’s (sic) are also injuried (sic) and really hurting. My neck and shoulder are very sore due to being shoved into my carpet by a Deputy. I just took 8 IBP for pain. I am too tired and frustrated to go to the ER tonight. They also took some of my Virginia Heritage Foundation historical articles about the South that I use where I go to speak. They mentioned “Manning says bad things about the government.”

Two men were Police from Kernersville, NC and one with a vest that said Homeland Security Investigation. Some were in plain clothes and the rest in Forsyth County Sheriffs gear.

Obviously Manning was upset as he wrote. In fact, even though the incident occurred late Wednesday evening into early Thursday morning, and he told Freedom Outpost via telephone that he had only begun to eat again late Saturday afternoon. He has updated over the past week, the events of that night.

If you look at the documentation you will see that only 1 firearm was listed as taken from the residence. However, one of the NC Security Bail Agents pointed out that “now on the search warrant, witnesses arrived videotaping the fact they took 6 large bags of things.(sic) and 9 guns, the receipt only lists one gun, and not enough to fill up 6 LARGE STYLE BAGS.”

Christopher Manning also made a statement concerning what went on:

Firstly, THERE ARE VIDEOS and many photos of portions of these events. I was charged with “prohibited practices.” In the court house, I clearly showed everyone my ID, since I was coming into the Forsyth County Court House to arrest a wanted criminal. I pissed off a security guard because I read (quoted) to him our rights of arrest as established by the Supreme Court decisions of “Taylor vs Taintor” and “NC State vs Mathis.” They refused to allow me enter the Forsyth County Court House to do my job, and I videotaped them, in a public place. I know personally from not only video, but my professional and legal counsel say “it’s far more than clear and never once have said anything about being law enforcement, nor had anything on showing such” so everyone can deal with it. They knew well before the raid on my home that I was in Greensboro and came to my Mom and Dad house anyway.

Secondly, they served a Search Warrant on my home, over a misdemeanor!? Yeah right, my ass. The Search Warrant showed that they wanted computers, e-storage devices, anti-gov material, my badge, my handcuffs and all equipment I use for my job. In full body armour they stormed in claiming that your son Christopher Manning had no position in the NCDOI (North Carolina Division of Insurance). https://sbs-nc.naic.org/Lion-Web/jsp/sbsreports/LicenseeListExtExtract.jsp, is the link showing i am very much active and currently working. It should be as illegal for a government civil employee or agent or law enforcement officer to lie to a CITIZEN as it is illegal for a citizen to lie to a law enforcement agent or to lie in court before a judge. IF I WERE BREAKING THE LAW, I’D BE SUSPENDED OR GIVEN A “REVOKED STATUS.” So get over what I was supposedly doing period. I’m sick of hearing the BS over what I did and what they are alleging I did. I know I’m in the clear, did nothing illegal or immoral and have no problem fighting their false accusation or proving anything I need to prove about my actions.

The DHS (Department of Homeland Security aka – Anal Probing Big Brother) DID NOT take anything of real interest to what the arrest warrants state. They took a bunch of empty boxes, tomato/flower plants in small seeding starting moss pots that my father planted for our front flower beds), my “fathers” firearms (NOT mine), and my poor kitties (“Mosbys”) towel where she sleeps and sits on the desk writing board by my Dads computer. I mean “really”? They missed all kinda of shit that you would have they would have taken if these two misdemeanor charges made against me were actually about me and anything I have actually done.

So what took’em three hours to go thru my house and taking and removing only six small bags of largely my Dad’s stuff? My friends arrived as they were doing these things and witnessed everything while I was being laughed-out of the jail (laughed at not in derision or scorn, but in a sympathetic and compassionate manner) by the Guilford County Judge Magistrate (Forsyth Sheriffs crossed the Forsyth County line to arrest me in Guilford County) who stated/asked to the Forsyth County Investigators “Are you guys nuts? Christopher is an officer of the courts” looking at Forsyth County Investigator Pardue. Then the Guilford County Judge Magistrate pleasantly and supportively said to me “Mr. Manning, get out of my Detention Center, you have signed a written promise, go home and good luck partner!”

So why were/are the feds involved? Why was the Forsyth County scared of me videotaping their Agents? Why did they serve a No-Knock Search Warrant on my home knowing that I was not there and my Dad was? They did injure my father, and damaged our home beyond the capabilities of my income, but i promise you, they will fix it, and I will beat them.

They used EXCESSIVE FORCE for claiming that it was prompted by two misdemeanor (made-up and false) charges against me and then using the raid to torture by father who still has no charges against him and this is four days AFTER the raid. There are NO federal offenses here yet. Why was it so important to get into my house and take empty boxes and and Dads Southern Historical Societies papers and gain copies of his religious, cultural and historical writings? Clearly i was used as a scapegoat to get to my father. Everyone we have asked , (not mentioning my dad’s historical writings as the issue) clearly point-out that it is obvious that they came for him and his works, barely dealing with me and only using me as a “cover.”

Kerri Hall, the director of Public Information for the NC Department of Insurance, said that there were no Homeland Security officers involved.

If you look at the documentation, I provided the link to above, you will see that only 1 firearm was listed as taken from the residence. However, one of the NC Security Bail Agents pointed out that “now on the search warrant, witnesses arrived videotaping the fact they took 6 large bags of things.(sic) and 9 guns, the receipt only lists one gun, and not enough to fill up 6 LARGE STYLE BAGS.”

According to this agent and to Tim Manning, Christopher fought the NCDOI for a year for denial of his license and won. In fact, Manning believes the NCDOI, as well as the Forsyth County Sheriff’s Department has a grudge against his son and that this is also orchestrated to shut him up as an outspoken Southern Nationalist.

Camel City Dispatch has a different take on things. The claims of Manning pointing a gun in the boy’s face are allegations, not proven. Also note the history of Manning wearing “fake police style tactical gear” is not against the law and Forsyth County Sheriffs attempted to bar him from entering the courthouse on official business because Manning has a pair of handcuffs and handcuff keys.

This story is ongoing.

Why does the Justice Department view a Halloween costume as racial discrimination?
October 23rd, 2021 Liberty Unyielding

Woman Discovers Amazon’s ‘Alexa’ Recorded Her Without Her Knowledge Over 3,000 Times
October 23rd, 2021 Flag And Cross