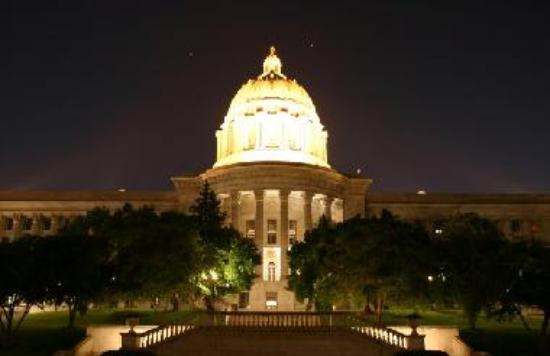 In Missouri our Governor works for us, even though he’s a Democrat. I love this story because I can only imagine the pain that Governor Jay Nixon is feeling now. He is between the proverbial rock and hard place. To fail to veto this bill would be a disservice to his party, but he has little choice.

On Wednesday the Missouri House of Representatives passed HB436 by a vote of 118-36 and sent it on to Missouri Governor Jay Nixon. This bill, which is soon to become law, will nullify all federal gun laws that infringe on the people’s right to bear arms in Missouri.

The Missouri Legislature sent the governor a bill Wednesday that would expand gun rights and declare all federal gun regulations unenforceable, in a response to President Obama’s push for gun control legislation.

The Republican-led Legislature passed the measure hoping to shield the state from federal proposals that would ban assault weapons and expand background checks. But the U.S. Senate’s defeat of a background check expansion three weeks ago did nothing to assuage the fears of Missouri Republicans who pressed forward with their legislation.

The Missouri House voted 118-36 Wednesday to send the bill to Democratic Gov. Jay Nixon. The Senate passed the measure earlier this month.

Here is the best news. When I first heard of the passage I was a bit nervous. With a Democratic Governor you would have to think that this was in question, but it’s not. The vote in the Senate was 26-6. The vote in the House was 118-36. The bottom line? Any veto will simply be overridden. It’s a done deal.

In Missouri our Governor works for us. He can try to veto if he wants but the veto will be overridden in the House. Here is a quote from an article by The Tenth Amendment Center which sums it up very nicely:

Local activist Matt Radcliffe acknowledged as much when he said, “Governor Nixon can do nothing and it will automatically become law July 1st.  Or he can sign it into law. Or he can veto it then his veto will be overridden in the house and it will become law anyway!”

Here is a brief blurb from HB436 which tells you all you need to know about this legislation:

Well done Missouri. The people of this state know the meaning of “Shall Not Be Infringed.”

Last month my birth state (Kansas) passed what is being touted as the strongest pro-2nd Amendment law in the country. Now Missouri, my current State of residence, has tried to top them. I can’t help but smile as of late. The good guys are winning and it’s about time.