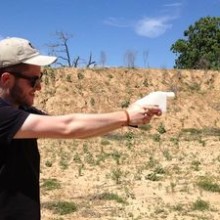 Cody Wilson, 25, a law student at the University of Texas and founder of the non-profit group Defense Distributed, had produced a 3-D printed handgun made entirely of ABS plastic with only a metal firing pin has had the information, on how to build the gun, removed from public access at the request of the United States Department of Defense Trade Controls. According to Wilson, they have seized control of the information.

I first reported that 3-D guns were for real back in July of 2012, when an internet gunsmith by the name of “Have Blue” produced an AR style pistol that fired both .22 and .223 caliber bullets.

[youtube]http://youtu.be/drPz6n6UXQY[/youtube]
take our poll - story continues below
Completing this poll grants you access to DC Clothesline updates free of charge. You may opt out at anytime. You also agree to this site's Privacy Policy and Terms of Use.

On the heels of that, Wilson had set up to manufacture his own weapon and then make the CAD blueprints of it available to the public so people could produce their own. However, once he leased a 3-D printer and it arrived, the company immediately picked it back up, claiming that Wilson’s company, DefenseDistributed.com, were violating the law in what they were doing.

Clearly they were not violating the law, as they were able to secure another means of 3-D printing, an $8,000 Stratasys Dimension SST 3-D printer, and not only produced the gun, but tested it. It passed.

Once the gun was tested and passed, the blueprints were made available on his site, DefCAD.org. However, on May 9, 2013, Defense Distributed tweeted out the following:

The top of the website communicated a similar, though more ominous message.

“DEFCAD files are being removed from public access at the request of the US Department of Defense Trade Controls. Until further notice, the United States government claims control of the information.”

The United States government claims control of the information? Huh? Did they create it? Do they do that with other gun manufacturers? I don’t think so. They are scared and as Defense Distributed’s tweet indicates, it seems that Secretary of State John Kerry is the one to blame.

Gun control freaks like New York Senator Chuck Schumer believes 3-D guns should be banned. “Guns are made out of plastic, so they would not be detectable by a metal detector at any airport or sporting event,” said Schumer. “Only metal part of the gun is the little firing pin and that is too small to be detected by metal detectors, for instance, when you go through an airport.”

Wilson has 9mm and .22 barrels in the works, but it looks like he may have to fight some legal battles to implement his project. How the United States government can claim control of this is beyond me. While Wilson did not have a federal firearm manufacturer’s license at the beginning of their project, they did obtain one after the Bureau of Alcohol, Tobacco, Firearms and Explosives (BATFE) sought him out. See what government regulation on a matter they have no constitutional authority in gets you?