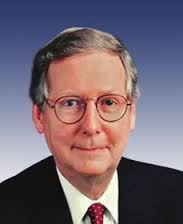 WASHINGTON, D.C. – U.S. Senate Republican Leader Mitch McConnell today called on the Obama administration to do a government-wide review in the wake of the IRS’ acknowledgement that they targeted conservative groups during last year’s national election:

“Today’s acknowledgement by the Obama administration that the IRS did in fact target conservative groups in the heat of last year’s national election is not enough. Today, I call on the White House to conduct a transparent, government-wide review aimed at assuring the American people that these thuggish practices are not underway at the IRS or elsewhere in the administration against anyone, regardless of their political views. Last year, amid reports that the Obama administration was using the levers of executive power to harass conservative political groups in Kentucky and elsewhere, I issued a very public warning to the administration that the targeting of private citizens on the basis of their political views would not be tolerated. Today’s apology by the IRS is proof that those concerns were well founded. But make no mistake, an apology won’t put this issue to rest. Now more than ever we need to send a clear message to the Obama Administration that the First Amendment is non-negotiable, and that apologies after an election year are not an sufficient response to what we now know took place at the IRS. This kind of political thuggery has absolutely no place in our politics.”

In February 2012, Tea Party organizations reportedly received letters from the regional IRS office in Cincinnati, demanding hundreds of pages of documents with little indication of the criteria being applied.

On March 14, 2012, Sen. McConnell joined ten other GOP senators in sending a letter to IRS Commissioner Shulman  seeking assurance that “this recent string of inquiries has a sound basis in law and is consistent with IRS’s treatment of tax-exempt organizations across the spectrum.”

“We have received reports and reviewed information from nonprofit civic organizations in Kentucky, Ohio, Tennessee, and Texas concerning recent IRS inquiries perceived to be excessive.  It is critical that the public have confidence that federal tax compliance efforts are pursued in a fair, even-handed, and transparent manner—without regard to politics of any kind.  To that end, we write today to seek your assurance that this recent string of inquiries has a sound basis in law and is consistent with the IRS’s treatment of tax-exempt organizations across the spectrum. … It is imperative that organizations applying for tax-exempt status are able to rely on a consistent and foreseeable review structure from the IRS.” (Twelve Republican Senators, Letter To IRS Commissioner Shulman, 3/14/12)

“Given the potentially serious implications of selective or discriminatory enforcement, we request that you hold further IRS-initiated demands for information from 501(c)(4) applicants beyond the extensive information already required of all applicants (in Form 1024 and Schedule B…” (Twelve Republican Senators, Letter To IRS Commissioner Shulman, 3/14/12)

On June 15, 2012, Sen. McConnell spoke on the issue at the American Enterprise Institute (video here), singling out the IRS actions for special criticism.

Sen. Mitch McConnell (R-KY): “the tactics I’m describing extend well beyond the campaign headquarters in Chicago. To an extent not seen since the Nixon administration, they extend deep into the administration itself. … Earlier this year, dozens of Tea Party-affiliated groups across the country learned what it was like to draw the attention of the speech police when they received a lengthy questionnaire from the IRS demanding attendance lists, meeting transcripts, and donor information. One of the group’s leaders described the situation this way: ‘[groups like ours] either drown … in unnecessary paper work … or you survive, and give them everything they want, only to be hung.’ The head of one national advocacy group has released documents which show that his group’s confidential IRS information found its way into the hands of a staunch critic on the Left who also happens to be a co-chairman of President Obama’s re-election committee. The only way this information could have been made public is if someone leaked it from inside the IRS. And just last week we learned of an IRS decision revoking the tax-exempt status of small political nonprofit groups that undoubtedly foreshadows an effort to do the same to bigger groups on the Right that the Obama Administration regards as a threat to its campaign. … let’s be very clear: no individual or group in this country should have to face harassment or intimidation, or incur crippling expenses, defending themselves against their own government, simply because that government doesn’t like the message they’re advocating.” (Sen. McConnell, Remarks At AEI, 6/15/12); (Video Here At Minute 11:15)

Sen. Mitch McConnell (R-KY): “One thing that has always distinguished America is the enthusiasm with which its citizens have organized around issues they believe in. Alexis de Tocqueville observed this more than 175 years ago, ‘In no country in the world,’ De Tocqueville wrote, ‘has the principle of association been more successfully used or applied to a greater multitude of objects than in America.’ Recent events, however, suggest that this principle is under serious threat — not only from some left-wing groups, which have resorted to intimidation to grind their critics into submission, but by an administration that has used the tools of government to do the same.” (“Fighting For The First Amendment,” Politico, 6/15/12)

McConnell: “Dozens of tea party-affiliated groups across the country learned earlier this year what it was like to draw the attention of the speech police when they received a lengthy questionnaire from the Internal Revenue Service, demanding attendance lists, meeting transcripts and donor information. As the leader of one organization described it: ‘[Groups like ours] either drown … in unnecessary paperwork … or you survive, and give them everything they want, only to be hung.’”(“Fighting For The First Amendment,” Politico, 6/15/12)

On June 18, 2012, Sen. McConnell joined a letter with ten other GOP senators to IRS Commissioner Shulman, reiterating their concerns with the IRS’s inquiries and stressing that Congress has made privacy the rule not the exception.

“‘Congress has made privacy the rule, and not the exception,’ wrote the Senators. ‘A list of donors who have given money to specific charitable organizations is something that carries great value to certain interested parties, as trading of personal information about private citizens has become common practice. Unfortunately, the public release of private donor information exposes citizens to possible harassment and intimidation by those who oppose the goals of the charitable organization.’” (Ten Republican Senators, Letter To IRS Commissioner Shulman, 6/18/12)

“… the IRS is requesting the names of donors and contributors to organizations that apply for tax exempt status.  In doing so, the IRS appears to be circumventing the statutory privacy protections that Congress has long provided donors.” (Ten Republican Senators, Letter To IRS Commissioner Shulman, 6/18/12)