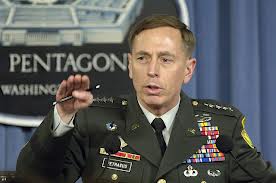 Is it any wonder that Petreaus’s private life suddenly exploded?

The Weekly Standard reported new details today describing how then-CIA Director David Petraeus voiced surprise when he learned the Saturday after the attack that officials had deleted all prior references to Al Qaeda and jihadists, leaving only the word “extremists.” US. Ambassador to the U.N. Susan Rice would use the final version of the talking points to say on several Sunday shows that the attack was triggered by protests over an anti-Islam film. The maker of that film is the person arrested and currently serving time for events surrounding the jihadi attack on the US consulate and the slaughter of our countrymen.

Greg Hicks, former deputy chief of mission in Libya,  said the anti-Islam film was actually a “nonevent” in Libya, and his “jaw dropped” when he heard Rice’s comments.

What a coincidence: almost immediately after this, Petraeus’ private life exploded all over the headlines, and he had to resign as director of the CIA. Surely Barack Obama wouldn’t have been trying to get him out of the way for what he knew about jihadist involvement in the Benghazi massacres, and Obama’s coverup of that involvement — Barack Obama wouldn’t stoop so low, now, would he?

“The Benghazi Scandal Grows,” by Stephen F. Hayes for the Weekly Standard, May 20 (thanks to Anne Crockett):

CIA director David Petraeus was surprised when he read the freshly rewritten talking points an aide had emailed him in the early afternoon of Saturday, September 15. One day earlier, analysts with the CIA’s Office of Terrorism Analysis had drafted a set of unclassified talking points policymakers could use to discuss the attacks in Benghazi, Libya. But this new version​—​produced with input from senior Obama administration policymakers​—​was a shadow of the original.The original CIA talking points had been blunt: The assault on U.S. facilities in Benghazi was a terrorist attack conducted by a large group of Islamic extremists, including some with ties to al Qaeda.

These were strong claims. The CIA usually qualifies its assessments, providing policymakers a sense of whether the conclusions of its analysis are offered with “high confidence,” “moderate confidence,” or “low confidence.” That first draft signaled confidence, even certainty: “We do know that Islamic extremists with ties to al Qaeda participated in the attack.”

There was good reason for this conviction. Within 24 hours of the attack, the U.S. government had intercepted communications between two al Qaeda-linked terrorists discussing the attacks in Benghazi. One of the jihadists, a member of Ansar al Sharia, reported to the other that he had participated in the assault on the U.S. diplomatic post. Solid evidence. And there was more. Later that same day, the CIA station chief in Libya had sent a memo back to Washington, reporting that eyewitnesses to the attack said the participants were known jihadists, with ties to al Qaeda.

Before circulating the talking points to administration policymakers in the early evening of Friday, September 14, CIA officials changed “Islamic extremists with ties to al Qaeda” to simply “Islamic extremists.” But elsewhere, they added new contextual references to radical Islamists. They noted that initial press reports pointed to Ansar al Sharia involvement and added a bullet point highlighting the fact that the agency had warned about another potential attack on U.S. diplomatic facilities in the region. “On 10 September we warned of social media reports calling for a demonstration in front of the [Cairo] Embassy and that jihadists were threatening to break into the Embassy.” All told, the draft of the CIA talking points that was sent to top Obama administration officials that Friday evening included more than a half-dozen references to the enemy​—​al Qaeda, Ansar al Sharia, jihadists, Islamic extremists, and so on.

The version Petraeus received in his inbox Saturday, however, had none. The only remaining allusion to the bad guys noted that “extremists” might have participated in “violent demonstrations.”

In an email at 2:44 p.m. to Chip Walter, head of the CIA’s legislative affairs office, Petraeus expressed frustration at the new, scrubbed talking points, noting that they had been stripped of much of the content his agency had provided. Petraeus noted with evident disappointment that the policymakers had even taken out the line about the CIA’s warning on Cairo. The CIA director, long regarded as a team player, declined to pick a fight with the White House and seemed resigned to the propagation of the administration’s preferred narrative. The final decisions about what to tell the American people rest with the national security staff, he reminded Walter, and not with the CIA.

This candid, real-time assessment from then-CIA director Petraeus offers a glimpse of what many intelligence officials were saying privately as top Obama officials set aside the truth about Benghazi and spun a fanciful tale about a movie that never mattered and a demonstration that never happened.

“The YouTube video was a nonevent in Libya,” said Gregory Hicks, a 22-year veteran diplomat and deputy chief of mission at the U.S. embassy in Tripoli at the time of the attacks, in testimony before the House Oversight and Reform Committee on May 8. “The only report that our mission made through every channel was that there had been an attack on a consulate . . . no protest.”

So how did Jay Carney, Susan Rice, Hillary Clinton, Barack Obama, and others come to sell the country a spurious narrative about a movie and a protest?

There are still more questions than answers. But one previously opaque aspect of the Obama administration’s efforts is becoming somewhat clearer. An email sent to Susan Rice following a key White House meeting where officials coordinated their public story lays out what happened in that meeting and offers more clues about who might have rewritten the talking points….