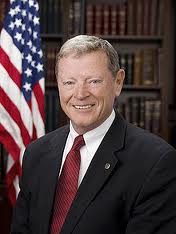 In an interview Thursday, on the Rusty Humphries Show, Senator Jim Inhofe (R-OK) talked about the Benghazi cover-up and officially started the impeachment buzz.

Senator Inhofe proclaimed that “of all the great cover-ups in history” Benghazi “is going to go down as most serious, most egregious cover-up in American history.”

He later noted that, “We may be starting to use the I-word before too long.”

When Rusty Humphries questioned the wisdom of impeaching Obama now, Inhofe noted it wouldn’t be immediate.

Inhofe seemed to confirm what many are thinking. With a Democratic majority in the Senate (officially 53-45 with two independents who caucus with the Democrats) there is not much chance of obtaining a conviction at this point. However, with 35 open seats in 2014, there is a chance to swing that majority.

The House of Representatives impeaches a public official with a simple majority vote, but to obtain a conviction the Senate must concur with a two-thirds majority (67 votes). It is unlikely that 67 votes could be gathered to convict the President of any charges at this time, but it appears that the GOP is looking forward to the 2014 elections to try to gain momentum.

The 2014 class of newly elected Senators will begin their terms on January 3, 2015. Inhofe seems to hint that this is the date that Republicans are looking toward. It seems that impeachment proceedings for political posturing is not the goal, at least not for Senator James Inhofe. He echoes the sentiments of uncounted millions who want Barack Obama removed from office.

We would naturally assume that the ranking Republican on the Senate Armed Services Committee is representative of other Republican Senators who look to him for leadership.

This is not what conservative Americans want to hear, but it is the only way to get a conviction. Party lines will be drawn and you will not find enough Democratic votes to convict, no matter how overwhelming the evidence may be. Not in 2013.

With new accusations from the families of Seal Team 6 and much to be learned about Benghazi, and other controversies, a little time might just do wonders for the chances of getting that conviction.

If you would like to listen to the entire 15-minute interview please go to “The Rusty Humpries Show.”

You might also enjoy reading an article that we published a couple of days ago. Do Not Ask Your Representatives to Impeach Obama…Not Yet Anyway The article goes through the process of impeachment and explains why moving too quickly may jeopardize the chances of a conviction.