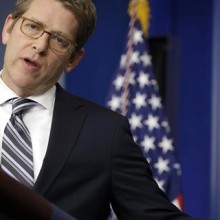 As if the Obama administration could not be more blatant than gagging reporters from live-tweets during one of Vice President Joe Biden’s speeches or demanding White House reporters get approval and even correction for their stories before going to press, they called for an off-the-record meeting with handpicked members of the press on Friday to discuss how to help cover-up Benghazi. Wait, sorry that was my imagination getting away from me there. They merely wanted to discuss Benghazi with a few reporters.

The White House held an off-the-record briefing with reporters on Friday afternoon to discuss recent revelations about the Benghazi investigation, sources familiar with the meeting tell POLITICO.

The off-the-record session was announced to reporters in the wake of an ABC News report showing that White House and State Dept. officials were involved in revising the now-discredited CIA talking points about the attack on Benghazi.

Hey, maybe I did have it right in the opening paragraph! By the way, the article in reference is this one, which caused even the BBC to claim that Benghazi was a big deal.

Some try to cover for Press Secretary and Obama mouthpiece Jay Carney.

Time Magazine reporter Jay Carney would have been the 1st person to object to how the WH is handling the press today.

Some have even gone so far as to blame the “far right” for the reason that the media is not any harder on the Obama administration. Cookie (perhaps we should change her name to Kookie now) Roberts appeared on Morning Joe with Joe Scarborough and this is what followed:

Scarborough later jumped in, “This has the DNA of a Clinton scandal more than it does an Obama scandal, does it not?”

“Scandal is a strong word,” Roberts replied, to which Scarborough asked, “What is a couple notches below a scandal? Kerfuffle? Four people are dead.”

“The first ambassador killed since 1979 — it is serious,” he continued. “You talk about overplaying your hand. If a lot of people on the far right hadn’t overplayed their hand on Benghazi and were screaming — before they knew what they were screaming about — I think we would all be much harder on the administration right now.”

All of this is background noise though because more S is about to HTF (Hit the fan) according to Stephen Hayes:

Hayes’ reporting on the Benghazi talking points has already been confirmed. We know that the talking points included removing any claims of jihadist involvement in the attacks in Benghazi.

However, Hayes has begun to name names. He’s fingered officials in both the State Department and the White House. He writes:

The CIA’s talking points, the ones that went out that Friday evening, were distributed via email to a group of top Obama administration officials. Forty-five minutes after receiving them, State Department spokeswoman Victoria Nuland expressed concerns about their contents, particularly the likelihood that members of Congress would criticize the State Department for “not paying attention to Agency warnings.” CIA officials responded with a new draft, stripped of all references to Ansar al Sharia. In an email a short time later, Nuland wrote that the changes did not “resolve all my issues or those of my building leadership.” She did not specify whom she meant by State Department “building leadership.” Ben Rhodes, a top Obama foreign policy and national security adviser, responded to the group, explaining that Nuland had raised valid concerns and advising that the issues would be resolved at a meeting of the National Security Council’s Deputies Committee the following morning. The Deputies Committee consists of high-ranking officials at the agencies with responsibility for national security—including State, Defense, and the CIA—as well as senior White House national security staffers.

While Jay Carney has confirmed the meeting took place, he says that it was merely a “background” briefing and was not off the record. I’m sure he’ll be willing to provide that for us then.

With more whistleblowers coming forward, as Hayes’ indicates, it seems the Obama administration is shaking in their boots. Meanwhile, the White House continues their lies as Carney denies that the White House was involved in scrubbing terrorism from Benghazi talking points.