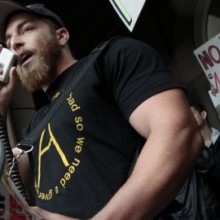 Last Thursday I wrote an opinion piece on the Armed March Protest in Washington, D.C. that is to be led by former New Mexico candidate and Iraq War veteran Adam Kokesh. While I agreed with the sentiment behind the march, there are a plethora of reasons for not engaging in his particular protest. I merely touched on a few obvious ones. However, the more that one begins to look into Mr. Kokesh’s background, the more one begins to question the real intentions and motives he has.

Despite his self-proclaimed history of mental instability and post-traumatic stress, one-time congressional candidate and perennial activist Adam Kokesh is organizing a pro-gun rally in which marchers will walk with loaded rifles into Washington from Virginia.

Kokesh, who served as a Marine NCO and reservist, attended Claremont McKenna College. His 2005 psychology thesis, “Hot, Dirty, and Dangerous: Seven Months of Civil and Not-So-Civil Affairs In And Around Fallujah” discusses suffering from post-traumatic stress. “I had a number of anxiety attacks those first few days back [from Iraq],” Kokesh wrote.

Kokesh was particularly disturbed by crowds, something which may prove problematic with the armed crowds at the forthcoming march. “I didn’t feel comfortable getting drunk, and the crowds made me nervous. When dealing with crowds in Iraq, I was always armed and I always had someone watching my back, usually with a machine gun. A cardinal rule for interacting with crowds was to never let anyone get behind you,” Kokesh wrote. “We had all heard the horror story of a Marine who was killed with his own pistol. When crowds got close around me I would often just leave one hand on my pistol and let my rifle dangle on the sling in front of me.”

That’s not all though, once he left the service, Kokesh attended college and he wrote, “Every time someone bumped into me from behind at a party I instinctively reached down for my pistol and had a moment of awkward panic before realizing that I was being absurd. I had developed such a strong habit of waking up two or three minutes before my alarm that I often woke up thinking I had to be somewhere. I was so used to being on guard when in public that it was hard to truly relax at first.”

He also became agitated when he was not allowed to bring his firearm on campus, saying that he was a veteran and had fought for the right to do so.

Now understand, this is not a shot at those who have served our country honorably and suffer from PTSD. In fact, I don’t blame Kokesh for his instinctive responses regarding how he reacts to things, which he said was absurd. I have met many men who have been in war who have similar reactions. I have been very vocal in saying that we should not be calling for the Federal government to start disarming our veterans because they have PTSD, nor do I think it the place of the Federal government to make mental health evaluations and disarm citizens.

However, it is noteworthy to understand the mental state of one leading an armed march on Washington, which he claims will be peaceful. In fact, in my article Kokesh is on video and audio stating, “This is an armed revolt against the American government…. Make no mistake about it…. We are going with the aim of overthrowing the government.” It’s also noteworthy that in the video, even Alex Jones, who talks a tough game when it comes to government and tyranny, looks a bit hesitant about Kokesh’s march.

Kokesh, along with several Muslims, also attempted to fake a hate crime in 2007 at George Washington University, which you can read about here.

Kokesh was also at the 2007 Gathering of Eagles, which was an event to honor the memory of veterans who died in Vietnam. He endorsed anti-war protest organizations that were calling for the desecration of the Vietnam Memorial with spray paint. The host of Freedom Fighter Radio attended the event to support the veterans and knew of the protest organizers’ plans and was prepared to defend the memorial. He witnessed the DC police confiscating spray paint from the backpacks of protesters, who were attempting to smuggle the paint in. This protest was also supported by Hamas and Hezbollah.

Michelle Malkin, who was also at GOE, recalls:

Before there was a nationwide, grass-roots Tea Party movement, there was another nationwide, grass-roots movement that brought thousands of Americans to Washington, D.C. They called themselves the “Gathering of Eagles.” I covered two massive, GoE rallies against the Soros-funded, anti-war Left in March 2007 and September 2007. GOE activists continue to expose the transnational progressives, anti-military bullies, and phonies who operate under the “peace” banner.

One of the groups that GOE dogged was Iraq Veterans Against the War (IVAW) — whose members have included bomb-threat bullies and death-threat nutballs who threatened to assassinate me, fake Army vet Jesse MacBeth, and another prominent member who smeared the Young America’s Foundation by faking an anti-Muslim hate flyer and smeared David Horowitz with similar race-card playing flyers, then weaseled out of the attacks by claiming they were “satire.”

The last two incidents involved an IVAW member named Adam Kokesh. He marched in uniform in mock patrols for the anti-war movement, paraded around holding an upside-down American flag (see Jonn Lilyea for more), was arrested for defacing signs, and traveled to Germany tourge soldiers to abandon their posts and seek aid and comfort with his anti-war minions.

Consider the following. Kokesh is not only a member of Iraq Veterans Against The War (IVAW), but he is a spokesman for them. The IVAW is allied with members of the Muslim American Society (MAS).

According to the Chicago Tribune,

An undated internal memo instructed MAS leaders on how to deal with inquiries about the new organization. If asked, “Are you the Muslim Brothers?” leaders should respond that they are an independent group called the Muslim American Society. “It is a self-explanatory name that does not need further explanation.”

And if the topic of terrorism were raised, leaders were told to say that they were against terrorism but that jihad was among a Muslim’s “divine legal rights” to be used to defend himself and his people and to spread Islam.

But MAS leaders say those documents and others obtained by the Tribune are either outdated or do not accurately reflect the views of the group’s leaders.

MAS describes itself as a “charitable, religious, social, cultural and educational not-for-profit organization.” It has headquarters in Alexandria, Va., and 53 chapters nationwide, including one in Bridgeview, across the street from the mosque there.

Shaker Elsayed, a top MAS official, says the organization was founded by Brotherhood members but has evolved to include Muslims from various backgrounds and ideologies.

Now friends, if you have followed our site for any length of time, you know we do believe that Islam itself is a tremendous threat to America. This makes this information even more pertinent.

Adam Kokesh, candidate for the Republican nomination for the US House of Representatives from the Third District of New Mexico, is doing his best to deceive the electorate. He portrays himself as a libertarian conservative, but he is neither libertarian nor conservative (unless he reinvents himself again). Most egregiously, he is attempting to portray himself as a patriotic anti-war/anti-military veteran in a manner reminiscent of John Kerry and Vietnam Veterans against the War (VVAW), in which Kerry tarnished the valor of his brothers-in-arms in order to advance his political career.

Adam Kokesh probably wishes that he had not been so open about his disloyalty, because he is now pretending to be a patriotic, libertarian-leaning, conservative Republican in his congressional campaign. Sorry, Adam; that just won’t wash. You have shown your true colors, and America-loving patriots just won’t let you get away with your masquerade.

Go ahead and renew your ties with the Code Pink/Winter Soldier/George Soros/IVAW crowd. Take off that suit and tie, and let your hair grow long in a John Kerry-look alike manner. Be what you want to be, as long as it’s not pretending to be an American patriot.

Finally, friends if someone is going to come out in open provocation in the manner that Kokesh is, all parties involved should be aware of just who they are dealing with. In the same manner that you cannot trust what a lot of people say, you look at what they do, a man would be wise to consider just who he is joining with in an alleged march for freedom.

This article was written with the help of Jim Stachowiak

Michelle Malkin also did a terrific piece yesterday as well with this information and more on Mr. Kokesh, which you can read here.