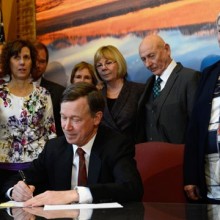 Back in March, Colorado Governor John Hickenlooper signed into law sweeping gun legislation which failed to garner a single Republican vote. However, those same Republicans warned their Democrat counterparts that the voters would have the last say in the matter.

The Weekly Standard reported, at the time, that Rob Autry, a pollster for Public Opinion Strategies, warned, “Democratic legislators also have to be mindful that even members of their own partisan coalition are conflicted about this proposed legislation.  While only 8% of Democrats oppose all of the gun control measures we tested, 70% of Democratic voters oppose one or some combination of the proposals (either the comprehensive package, the background checks, the liability claim, or the high-capacity magazine ban).”

Senator Greg Brophy also commented, “These poll numbers prove that Governor Hickenlooper and the Democrats are listening to Bloomberg and Biden instead of Coloradans.”

Autry went on to write, “Not surprisingly, Republican voters in the state overwhelmingly oppose the comprehensive package (62% say it’s the wrong approach and another 26% say it goes too far), oppose holding manufacturers and sellers legally liable (94% oppose), and oppose the high-capacity magazine ban (85% agree with opponents).  For the most part, the highly politically prized Independent voting bloc also opposes the key gun control measures we tested in this survey.  Fully 69% oppose passing the comprehensive legislation (33% oppose outright, 36% think it goes too far), 84% oppose holding manufacturers and sellers liable, and 55% oppose the high-capacity magazine ban when presented with both sides.  The one area of exception is the proposal to require gun buyers to pay the cost for a background check (51% of Republicans and 69% of Independent favor it).  But, on the whole, Independents are more inclined to agree with Republicans (and gun owners), than with Democrats (and anti-NRA allies).”

Two out of three Coloradans do not believe that new gun control measures with reduce crime or even make the state safer.

One thing is for sure, Democrats were warned that there would be political ramifications. Now those ramifications are public knowledge as Fox News reports that several lawmakers are facing recall efforts.

Morse, the Senate president, pushed a more far-reaching proposal that called for holding owners, sellers and makers of assault-type weapons liable for havoc inflicted by their guns.

He pulled the bill upon realizing he didn’t have enough votes. But his efforts have still drawn the ire of the groups.

The petition drives are being organized by the organizations Pueblo Freedom and Rights Group. They will need signatures from 25 percent of the vote in each lawmaker’s district to trigger a special election.

The signature deadline is May 21.

Dave Saleh, who is helping to organize the recall of Rep. McLachlan said of Governor Hickenlooper, “It shows what he really is, which is a liberal progressive. We’re going to damn sure deal with these politicians here, if not with the recalls then in 2014. … This momentum will carry us into 2014 and beyond, this legislation in Colorado has been so overreaching.”

“What they’re accusing us all of is passing sensible gun legislation that 90 percent of the public supports, so how does that work to get 50 percent to [vote for a] recall?” Morse asked.

According to Chris Good, “None of the recall campaigns would say how many signatures they had collected so far, but Saleh admitted that it would be “very difficult” to obtain the 10,587 signatures necessary in his rural district. Other campaigns projected confidence that they’d be able to meet the signature requirements, all between 7,000 and 19,000 signatures. McLachlan and Giron represent the rural areas surrounding Pueblo and Durango; Morse and Hudak represent Colorado Springs and the Denver suburb of Westminster, respectively.”

“The first petition was approved in mid-March, as the gun bills made their way through the legislature,” Good continues. “Organizers will have to submit their signatures between mid-May and early June. If they succeed, the lawmakers could see recall votes between July and October. Voters would decide simultaneously whether they want to recall the lawmakers and, if so, who should replace them.”

I suppose we’ll know soon enough if Colorado will succumb to Socialism or if they will stand on the side of freedom.