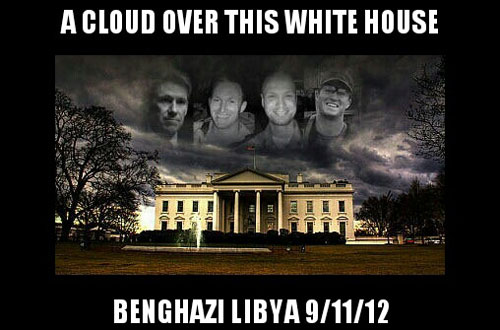 Big news for us so-called “witch hunters”… One of the key whistleblowers who testified before Congress last week voted for Obama twice (2008 and 2012 general elections) and also for Hillary Clinton in a 2008 primary. He is a registered Democrat in Virginia. The Daily Caller reports:

A key Benghazi whistle-blower who has allegedly been punished for speaking out against the administration is a registered Democrat who voted for both Hillary Clinton and Barack Obama.

The lawyer of Gregory Hicks, the former U.S. deputy chief of mission in Libya who testified before the House Oversight and Government Reform Committee Wednesday, confirmed the information to The Daily Caller on Saturday.

According to the lawyer, Victoria Toensing, Hicks voted for Clinton during the 2008 primary, and for then-Illinois Sen. Obama in the 2008 general election. He again voted for Obama in 2012.

“The fact is he is a registered Democrat in Virginia. The fact is he voted for Hilary in the primary and Obama and then again for Obama,” Toensing said.

Toensing added that she did not know he was a Democrat until the day before the hearing.

The fact that Hicks was an Obama and Clinton supporter is a key piece of information in regards to the credibility of his testimony. This would certainly be some ammunition to fly in the face of mainstream liberal media sources like The Washington Post who recently published an op-ed entitled “Republicans lead a witch hunt on Benghazi.”  CNN also ran a piece entitled “Benghazi: Search for truth or witch hunt?” Most recently on Sunday’s “Face the Nation,” Illinois Senator Dick Durbin dropped this line again as a concluding point to a quick rant, “and yet the witch hunt continues.”

If you actually want to take the time to “google” the phrase “Benghazi witch hunt” you will find enough articles to make a quite extensive digest. If you were to print them all you might not need much firewood next winter. This seems to be the catch phrase from the left to discredit the right at the present time.

Let’s look at a definition of “witch hunt” from thefreedictionary.com:

An investigation carried out ostensibly to uncover subversive activities but actually used to harass and undermine those with differing views.

I fail to see how this definition would apply when a key witness is actually someone who shares the political views of Clinton and Obama. I don’t normally have very much good to say about those of the liberal ideology but I would commend Mr. Gregory Hicks for being one of the good guys. I will likely never agree with many of his political ideologies but I very much respect one thing that he and I have in common…

We want the truth!

I’d be just as concerned about this issue if a conservative were in the White House and so would Hicks. Do you understand how hard it was for him to come forward? The last thing I’d want to do is throw someone like Rand Paul, for instance, under the bus, but I would do it if it meant uncovering the truth.  You have to do it. It’s about integrity.

Some things are much more important than where you stand politically. There are still a few people on both sides who think for themselves and as long as we have that, we also have hope for America.