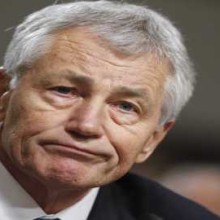 On Monday morning, Congressmen Steve Scalise (R-LA) and John Fleming (R-LA) sent a letter, signed by 59 members of the U.S. House of Representatives to Secretary of Defense Chuck Hagel at the Pentagon. The contents of the letter demanded that Hagel explain a recent meeting that he and other Pentagon officials had with anti-Christian extremist, Michael “Mikey” Weinstein, Founder and President of the Military Religious Freedom Foundation (MRFF). They expressed their concerns and raising questions about a meeting between Pentagon officials and Michael “Mikey” Weinstein to discuss religious freedom in the military. The letter outlines Weinstein’s well-documented disparaging remarks about Christianity and questions the Pentagon’s reasoning for accepting the meeting.

If you recall, just a few weeks ago the story broke that the Pentagon confirmed reports about their meeting with Weinstein and that there was calls from his organization to the U.S. Air Force to enforce a regulation that they believe calls for the court martial of any service member caught proselytizing.

President Mikey Weinstein and others from his organization met privately with Pentagon officials on April 23. He said U.S. troops who proselytize are guilty of sedition and treason and should be punished – by the hundreds if necessary – to stave off what he called a “tidal wave of fundamentalists.”

“Someone needs to be punished for this,” Weinstein told Fox News. “Until the Air Force or Army or Navy or Marine Corps punishes a member of the military for unconstitutional religious proselytizing and oppression, we will never have the ability to stop this horrible, horrendous, dehumanizing behavior.”

Weinstein became even more radical in his views, comparing proselytizing to rape!

“Mikey Weinstein has characterized Christians as ‘monsters who terrorize their fellow Americans,’ and has compared men and women of faith in the military to the Taliban and Al Qaeda,” said Fleming. “Since this meeting occurred in April, the Pentagon has sent mixed signals that are raising questions about the religious freedom of the men and women who fight to protect that freedom for all Americans. We need answers about this meeting, and any others that might infringe on the freedom of all of our Armed Forces to live out their religious beliefs without fear of punishment.”

“The actions and derogatory comments made by Michael Weinstein highlight his questionable judgment and disrespect towards those of the Christian faith,” Scalise said.  ”The fact that Pentagon officials met with Mr. Weinstein raises serious questions and concerns about the Pentagon’s approach to finalizing religious protection regulations.  It is critical that Pentagon officials provide much-needed answers to the thousands of Christians that serve in our armed forces and clarify the nature and intent of the meeting.”

The letter sent by the two Louisiana congressmen begins:

“It has come to our attention that as recently as April 23, 2013, Pentagon officials met with Mr. Michael ‘Mikey’ Weinstein, Founder and President of the Military Religious Freedom Foundation (MRFF), to discuss religious freedom in the military. As we have great concern regarding numerous inflammatory statements from Mr. Weinstein in recent weeks, we are seeking further clarification on the meeting that took place late last month.”

“In a recent posting in his own words, Mr. Weinstein characterized men and women of the Christian faith as, ‘monsters who terrorize their fellow Americans’ and offered consent to labeling individual faith based family groups as ‘hate groups,’” the letter continued. “Mr. Weinstein also [referenced such individuals and groups] as “die-hard enemies of the United States Constitution.”

The letter also said that Weinstein compared men and women of faith serving in the Pentagon to the Taliban and Al-Qaeda and the followers of the Christian faith to that of Adolp Hitler and Joseph Stalin.

As a result the letter demands answers (though they wrote that they were “respectfully” requesting clarification) on the nature of the meeting and detailed information on the following:

1. Confirmation of a meeting between pentagon officials and representatives from MRFF, as well as a list of meeting attendees, both military and civilians;

3. Prior to arranging this meeting, where Pentagon officials aware of Mr. Weinstein’s previous statements, including those referenced above?

4. In addition to any meetings already held, are there additional meetings scheduled?

Once again, the Obama administration is under investigation for attempts at violating the Constitution. Let no one say, “Well Obama said he was for the Constitution” or “Obama swore a solemn oath to “preserve, protect and defend the Constitution of the United States.” In the end, look at what he does, not what he says. This is exactly why Chuck Hagel faced such questioning during his confirmation hearings. Sadly, too many Republicans joined with Democrats to confirm him.