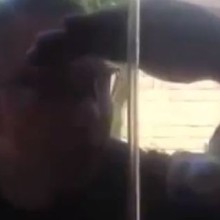 In a shocking video of police brutality, police in Cotati, California respond to an anonymous call about alleged domestic violence by kicking in the door before tazing a man and his wife.

The officers showed up at the doorstep of the home, much to the surprise of the homeowners after a call was placed that alleged the couple was involved in a domestic violence dispute. The homeowner was aware that police officers were on the lawn and began to document the incident by video.

The law enforcement officers advised the homeowners that they would be entering the home (without a warrant, I might add) due to the anonymous call. At this point both the man and woman informed the officers that they had merely an argument and that no domestic violence had taken place.

“Why are you guys not coming out?” one of the officers questioned.

The gentleman then states that he is not going to comply with the order “Because we don’t live in a police state, sir. Martial law has not been established in this country.”

The police were obviously taken back when the homeowners refused to obey their orders and exit their home. In response, the man said that it was his Fourth Amendment right to be safe and secure in his home and the look on the police officers face is priceless.

He then orders them to get on the ground with their hands behind their backs and says, “We’re gonna kick in the door.”

However, the jack booted thugs outside his home were not just going to go away quietly. They took matters into their own hands, and I might add unlawfully. They kicked in the door and began tazing the couple.

Many have speculated as to why the police felt they needed to unlawfully enter the home, with some claiming they could have felt the children lives were in danger yet the fact of the matter is the children were clearly fine and, if anything, would be psychologically and possibly even physically hurt by police breaking down their door and attacking their parents.

However, under Florida v. J.L. (March 28, 2000), “the U.S. Supreme Court affirmed that anonymous tips are not sufficient grounds to constitute probable cause for a search. Judge Ginsburg, writing for the Supreme Court, stated, “Such an exception would enable any person seeking to harass another to set in motion an intrusive, embarrassing police search of the targeted person simply by placing an anonymous call.…”

So my fellow Americans, understand this, these officers are fortunate the homeowner didn’t shoot them dead as soon as they kicked in the door. I smell a huge lawsuit going on. This is what happens when you allow anonymous tips to take place without evidence. These officers could have stood outside the door, called for a warrant and then, if a judge would actually issue them one, shown the warrant to the homeowners and I’m sure they would have allowed them to investigate. Otherwise, these men broke the law and the real victims in this case are the law abiding homeowners.

Personally, each of these officers should be removed from the force and a lawsuit should be engaged against each of these officers and their superior for not putting a stop to it. As long as men like this are allowed to be “law enforcement officers,” it gives those who are good law enforcement officers a bad name and allows for more violations of the law by those who are sworn to uphold it.