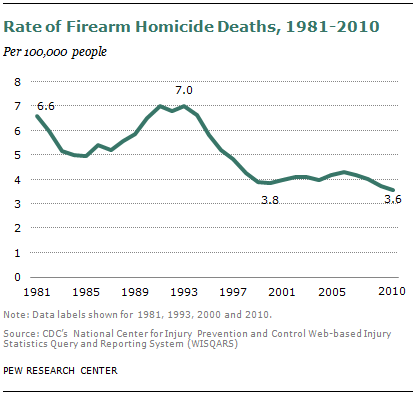 There is nothing better than big media sources telling the truth about gun violence. Mr. Larry Bell had an article published on Forbes.com yesterday that should be bookmarked by every single 2nd Amendment advocate in the country. You might want to print this one out.  Sometimes I take these articles and highlight key quotes and give my comments and opinions. This article is way too good for that. I will give you a few paragraphs and then you need to go read the article for yourself. The next time a socialist gun grabber tries to get you into a debate, this one article will give you all of the statistics you need. It is that good.

From Forbes.com and Larry Bell:

A couple of new studies reveal the gun-control hypesters’ worst nightmare…more people are buying firearms, while firearm-related homicides and suicides are steadily diminishing. What crackpots came up with these conclusions? One set of statistics was compiled by the U.S. Department of Justice. The other was reported by the Pew Research Center.

According to DOJ’s Bureau of Justice Statistics, U.S. gun-related homicides dropped 39 percent over the course of 18 years, from 18,253 during 1993, to 11,101 in 2011. During the same period, non-fatal firearm crimes decreased even more, a whopping 69 percent. The majority of those declines in both categories occurred during the first 10 years of that time frame. Firearm homicides declined from 1993 to 1999, rose through 2006, and then declined again through 2011. Non-fatal firearm violence declined from 1993 through 2004, then fluctuated in the mid-to-late 2000s.

And where did the bad people who did the shooting get most of their guns? Were those gun show “loopholes” responsible? Nope. According to surveys DOJ conducted of state prison inmates during 2004 (the most recent year of data available), only two percent who owned a gun at the time of their offense bought it at either a gun show or flea market. About 10 percent said they purchased their gun from a retail shop or pawnshop, 37 percent obtained it from family or friends, and another 40 percent obtained it from an illegal source.

The March Pew study, drawn from numbers obtained from the Bureau of Justice Statistics and Centers for Disease Control and Prevention, also found a dramatic drop in gun crime over the past two decades. Their accounting shows a 49 percent decline in the homicide rate, and a 75 percent decline of non-fatal violent crime victimization. More than 8 in 10 gun homicide victims in 2010 were men and boys. Fifty-five percent of the homicide victims were black, far beyond their 13 percent share of the population.