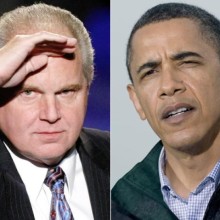 In the wake of reports that Barack Obama is blaming talk show host Rush Limbaugh (guess he couldn’t find it in himself to blame George W. Bush) for the gridlock in Washington, the radio host has given him an offer he simply can’t refuse… or can he? Limbaugh has offered to have a face-to-face discussion with Obama.

“In the spirit of doing whatever I can to move things forward in this country,” Limbaugh said Tuesday, “I would like to make myself available to the president of the United States to sit down and talk with him at a place of his choosing and discuss the problems facing the country, and maybe working together, since I am the opposition, since I am the obstacle, since I am the reason he can’t get things done.”

“I’ll be glad to sit down with him, any time, any place that he wants. Perhaps we can hash this out and come to a … mutual understanding or agreement of how to get things off the dime and to move things forward.”

Limbaugh pointed out that “the president has had beer with a cop from Boston. There have been numerous summits.  I am offering to make myself available to the president at a summit so that we can hash this out, so that I can explain to him why it is that I oppose what he’s trying to do. Maybe we can come to some sort agreement.”

On Monday, Obama, amidst meeting with actress Jessica Biel and her husband entertainer Justin Timberlake, along with designer Tommy Hilfiger at the Greenwich Village home of producer Harvey Weinstein blamed the talk show host for the lack of progress on his agenda.

“My thinking was when we beat [Republicans] in 2012 that might break the fever, and it’s not quite broken yet,” Obama said. “I genuinely believe there are Republicans out there who would like to work with us but they’re fearful of their base and they’re concerned about what Rush Limbaugh might say about them. And as a consequence we get the kind of gridlock that makes people cynical about government.”

Limbaugh responded, “Let me translate this for you. What the president of the United States is really saying is that Republican senators, Republican members of the House of Representatives do not vote the way he wants them to because they’re afraid that I will tell the truth about them. If it were not for me, the news media would be able to protect him.”

“In fact, what the president is saying is that these elected Republicans actually do want to help him,” he continued. “They do want to vote with him. They do want to join him in his agenda. But they can’t, since I will actually report what they’re doing, they have to worry that their constituents will hear the truth from me and get mad at them. If I weren’t around, they could for vote for Obama and vote with Obama and the media would cover for them and there would not be any media criticism of them. This is what the president is saying. The president is telling his donors that there are plenty of Republicans that can’t wait to help him move his agenda forward if not for their fear of me.”

“This is the third olive branch that I have offered in this spirit of cooperation, assistance, and help,” he added.

I’m guessing Obama won’t meet with Limbaugh since he hasn’t in the past. It’s quite interesting seeing that he met with Mitt Romney, but perhaps that was probably to gloat, not be corrected about his policies. After all, he needs someone to blame all of his failed policies on and perhaps the claims of “It’s Bush’s Fault” are now ringing on deaf ears.