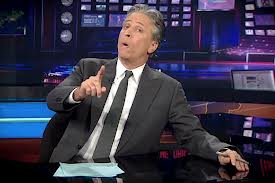 Comedy Central’s Jon Stewart, a well known liberal comedian, went absolutely ballistic on Barack Obama earlier this week. I am not a regular viewer of The Daily Show and not a fan of Mr. Stewart so it took me a couple of days to come across this video. If you need a laugh, you need to watch this video. Warning, if vulgarity offends you then this is not the video for you. Everything is “bleeped” out but it’s not hard to figure out what he is saying. It made me laugh but everyone has their own unique sense of humor. Check it out:

Here are a few other quotes from Jon Stewart that you might find humorous as well, just in case I attracted any loyal Jon Stewart fans. But for what it’s worth I do find that video priceless. I needed a laugh today.

‘The press can hold its magnifying glass up to our problems and illuminate problems heretofore unseen, or it can use its magnifying glass to light ants on fire, and then perhaps host a week of shows on the sudden, unexpected dangerous-flaming-ant epidemic. If we amplify everything, we hear nothing.”—Jon Stewart, in his closing remarks at the Rally to Restore Sanity and/or Fear in Washington

”To have not shot his friend in the face would have sent a message to the quail that America is weak. ” —Jon Stewart, on Dick Cheney’s hunting accident

I am not sure that anyone considers Jon Stewart a serious media outlet but one thing is for certain, with major networks like MSNBC starting to turn on Obama to try to save face, Barack is in trouble.