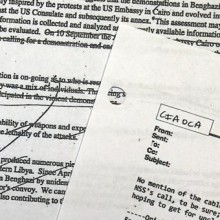 Well, it’s becoming clear now that Benghazi is and has been a coverup all along, just as we knew it was. The White House finally released 100 pages of Benghazi emails last night and they confirm that the State Department did push to edit the talking points on Benghazi. View the emails here.

The emails confirm the ABC News report that the so-called “talking points” written by the CIA on the attack underwent extensive revisions – 12 versions – and that substantial changes were made after the State Department expressed concerns.

The early versions of the talking points, drafted entirely by the CIA, included references to the al Qaeda affiliate Ansar al-Sharia and to previous CIA warnings about terror threats in Benghazi. State Department spokesman Victoria Nuland expressed concerns about including those references in the talking points.

In one email, previously reported by ABC News, Nuland said that including the CIA warnings “could be used by Members [of Congress] to beat the State Department for not paying attention to Agency warnings so why do we want to feed that? Concerned …”

After some changes were made, Nuland was still not satisfied.

“These don’t resolve all my issues or those of my building leadership,” Nuland wrote.

All 12 versions of the talking points that were previously reported indicate that the attack in Benghazi was “spontaneously inspired by protest in Cairo.” However, the talk of protests began with the Central Intelligence Agency (CIA), but they removed the part where the CIA state that it believed Ansar al-Sharia took part in that attack and had warned of the terror threat.

Assistant Secretary of State for Legislative Affairs David S. Adams wrote, “That last bullet especially will read to members [of Congress] like we had been repeatedly warned.”

That isn’t all though. Guy Benson writes at Townhall.com:

The emails do show that the erroneous “spontaneous demonstrations” talking point was included in the original, CIA-produced drafts. However, references to terrorist involvement and prior security warnings were erased at the behest of the State Department, based on nakedly political considerations.  Note, too, that many of these 100 pages were duplicative, and do not cover the key deliberations of September 12th and 13th — the days immediately following the attack.  Amb. Chris Stevens’ second in command personally told Sec. Clinton that the Benghazi raid was an orchestrated terrorist attack as it was unfolding on 9/11.  An Assistant Secretary of State affirmed that self-evident truth in an email to a Libyan official the next day (skip to 2:05 in that clip).  Four days later, Amb. Susan Rice went on five television shows, downplayed and dismissed the terrorism connection, and said the incident was the “direct result” of an obscure YouTube video.  Stephen Hayes, who got this ball rolling a few weeks ago, summarized his analysis of the newly-disclosed email trail:

Hayes’ full analysis of the new data dump is here.  Don’t forget that (a) CIA Director David Petraeus called the final sanitized talking points “useless,” and (b) Jay Carney claimed last year that the White House and State Department had only made one cosmetic change to the talking points.  These emails totally contradict that assertion.  One CIA email goes so far as to say that the State Department objected to “much or most” of the original points, which included mentions of terrorism and warnings.  “We revised the document with their concerns in mind,” the email says.  Another email from the CIA mentioned that the FBI also believed the attack was the work of terrorists.  That detail was struck in order to placate State.  Take a look at what was scribbled out, even though it was the intelligence community’s best assessment of the situation:

Allahpundit broke down several of the emails released and wrote, “Another State Department deputy, David Adams, complained earlier in the evening (page 40) that that fourth paragraph “will read to members like we had been repeatedly warned.” But they had been repeatedly warned: That was the whole point of the initial Benghazi testimony last year from Eric Nordstrom, culminating in his claim that the “Taliban is on the inside of the building” at State because they wouldn’t listen to repeated requests for more security. On the day he died, Stevens sent a cable to State emphasizing his concerns about “growing problems with security” in Benghazi. O’s critics have chased a thousand different strands of this story, but that remains the most egregious element of it. State’s diplomatic team in Libya begged them for more security and were refused. And after it was over, Nuland and Adams fretted that the public might conclude they hadn’t done enough to protect their troops if the talking points were left as is. Heaven forbid.”

He then concludes, “When push comes to shove, I think Dave Weigel’s right about tonight’s document dump. It doesn’t tell us much that Steve Hayes hadn’t already told us. The biggest point in the administration’s favor remains the fact that, from the beginning, the CIA itself erroneously thought the attack was the product of a spontaneous protest — which, of course, doesn’t justify the scrubbing of the rest of the document at State’s behest. Just one note in parting, though: Why do the e-mails start on September 14? There’d been three days of government verbiage, some of it blaming the Mohammed video, before this. When do we get those e-mails?”