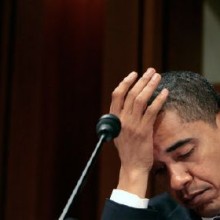 Did you know the Obama administration has a witness protection program for known or suspected terrorists? You didn’t? Well, now you do. On top of that it might interest you to know that they not only have such a program, but they have lost two or more of these known or suspected terrorists. Thanks to the numerous scandals the White House is immersed in, many people won’t even hear about this.

First, according to the Associated Press:

The Justice Department failed to provide the names of some terrorists in the witness protection program to the center that maintains the government’s watch list used to keep dangerous people off airline flights, the department’s inspector general said in a report Thursday.

As a result of the department’s failure to properly share information, some in the witness protection program who were on the “no-fly” list were allowed to travel on commercial flights, the federal watchdog said.

“It was possible for known or suspected terrorists to fly on commercial airplanes in or over the United States and evade one of the government’s primary means of identifying and tracking terrorists’ movements and actions,” the report said.

To help protect witnesses from the people and organizations against whom they testify, the U.S. Marshals Service provides cooperating witnesses with new names and identities.

“We found that the department was not authorizing the disclosure to the Terrorist Screening Center of the new identities provided to known or suspects terrorists” in the federal Witness Security Program, known officially as WitSec.

The Marshals Service has concluded that “one individual was and the other individual was believed to be residing outside of the United States,” according to the summary.

The report notes that while in the middle of an audit of the WITSEC program, also referred to as “WitSec,” the IG notified the Justice Department of national security vulnerabilities, and the IG’s office “developed the interim report to help ensure that the Department promptly and sufficiently addressed the deficiencies we found.”

After its audit, the IG’s office reported “the Department did not definitively know how many known or suspected terrorists were admitted into the WITSEC program,” among other “significant issues concerning national security.”

As of March 2013, the Justice Department was reviewing more than 18,000 Witness Protection Program case files to determine whether more known or suspected terrorists have been admitted to the program, the summary notes. As such, the number of terrorists lost or unaccounted for “may not be complete and may continue to evolve.”

You can read the entire summary here.

Well isn’t that nice? Now we have at least two known or suspected terrorists that have knowledge of how our witness protection system works on the loose. We can safely assume that those details of how that system works has been compromised.

House Judiciary Committee Chairman Bob Goodlatte (R-Va.) immediately announced plans to hold a hearing on the report’s findings, which he called a “gross mismanagement” that “jeopardizes American lives and cannot be tolerated.”

“This lack of interagency information sharing appears to be systemic,” he continued. “We witnessed similar interagency sharing problems leading up to last month’s bombings in Boston,” he said.

“We cannot afford for history to repeat itself again,” he added. “The administration needs to better facilitate interagency information sharing so that we can better thwart future terrorist attacks.”

Senator Charles Grassley (R-IA) issued a statement saying, “It appears the administration is trying to limit distribution to avoid embarrassment about how bad some of the details are, rather than to legitimately protect identities.”

Not only are we talking criminal activity in the Obama administration, but utter national security incompetence as well as simple governing incompetence. However, it gets better or worse depending on your perspective.

The same AP story indicates that the DOJ did not update the Terrorist Screening Center with the names of the lost terrorists. The TSC is that watch list that is supposed to be used to keep known or suspected terrorists off commercial airline flights. According to the inspector general’s office, some who were in the witness protection program who were also on the no-fly list were allowed to board commercial flights.

It’s obvious that we have not only incompetence at governing, but I believe targeted criminal activity from the Obama administration. What I mean is that they have no idea on how to actually govern anything, but they know exactly what they are doing in committing crimes against the people of the United States. When is America going to have enough?