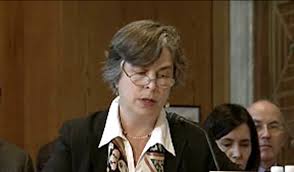 For those who may have missed the story yesterday, Sarah Hall Ingram, who was in charge of tax-exempt organizations while Patriot groups, and many others, were targeted is now in charge of the IRS office responsible for Obamacare. Evidently the gentleman who volunteered to take the fall for her had only been at his position for a week. This is unreal. To recap, let’s see what ABC News had to say:

The Internal Revenue Service official in charge of the tax-exempt organizations at the time when the unit targeted tea party groups now runs the IRS office responsible for the health care legislation.

Sarah Hall Ingram served as commissioner of the office responsible for tax-exempt organizations between 2009 and 2012. But Ingram has since left that part of the IRS and is now the director of the IRS’ Affordable Care Act office, the IRS confirmed to ABC News today.

Her successor, Joseph Grant, is taking the fall for misdeeds at the scandal-plagued unit between 2010 and 2012. During at least part of that time, Grant served as deputy commissioner of the tax-exempt unit.

Grant announced today that he would retire June 3, despite being appointed as commissioner of the tax-exempt office May 8, a week ago.

As the House voted to fully repeal the Affordable Care Act Thursday evening, House Speaker John Boehner expressed “serious concerns” that the IRS is empowered as the law’s chief enforcer.

Am I the only one dangerously close to losing my mind at this point? Is this real? Oh yes, and it gets much worse. The Washington Examiner is reporting that Ingram got paid very well to oversee an office that was carrying a torch for the left.

The 2010, 2011 and 2012 bonuses were awarded during the period when IRS harrassment of the conservative groups was most intense. The newspaper obtained the data via a Freedom of Information Act request.

Ingram has some history as a government lawyer receiving controversial bonuses. According to The Washington Post, she received a $47,900 bonus for distinguished service in 2004 from President George W. Bush.

Why does someone making over $170,000 need a bonus? Honestly I wasn’t aware that IRS agents could get bonuses. What are they for? Do you get a commission for squeezing blood from turnips?

For those of you who missed the story yesterday here is a video that might help you understand what just happened. I am close to speechless lately. It’s kind of hard to cover the scandals when there are so many of them running concurrently.

I need to mention one additional thing. When chaos becomes this incessant in our daily lives I feel there is truly only one explanation. In the last week alone we have received new information about:

As for what is going on…there is only one who can be responsible for all of this.

And before you go all crazy and throw on your tin foil hat…no I am not saying that Dana Carvey was involved. It was supposed to be metaphorical. But, then again, it would not surprise me. It’s been a long week. Thank God It’s Friday!