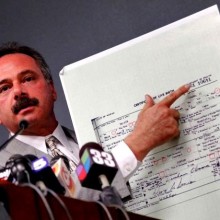 Michael Zullo, the lead investigator for Sheriff Joe Arpaio’s Cold Case Posse submitted an affidavit to the Alabama Supreme Court in the Barack Obama eligibility case, in which he listed literally hundreds of reasons to question the eligibility of Barack Obama to be President and pointed out that obvious problems which he believes indicate that the birth certificate that was posted to the White House website is a forgery. We’ve already seen multiple copies of the birth certificate presented to the court.

Keep in mind that this is not a press conference, but an affidavit submitted to a court. It is no longer a matter of just making information known, but this is a written sworn statement of fact voluntarily made by Mr. Zullo under an oath which is administered by an authorized person to do so by law.

There is much that we have covered here at FreedomOutpost.com in regards to Obama’s eligibility. We’ve covered his background on a number of issues as well as the fraud of his birth certificate and history. The affidavit is far too long for a simple article, so we are making it available for you to read through. Without further ado, here is the complete text of the affidavit, along with relevant images. You may also download a PDF copy of the affidavit here.

IN THE SUPREME COURT OF ALABAMA

My name is Michael Zullo, I am a citizen over 18 years of age and a resident of Arizona. The information contained in the affidavit is based on my personal knowledge and if called as a witness, I could testify completely thereto. I am a former sworn law enforcement office/criminal investigator and currently appointed by the elected Sheriff of Maricopa County, Joseph M. Arpaio as the commander of his Cold Case Posse and serving in this capacity as the chief investigator commissioned to investigate the allegations brought to his attention that President Obama’s identity documents were forged. I hereby swear, to the best of my knowledge and belief, as follows: