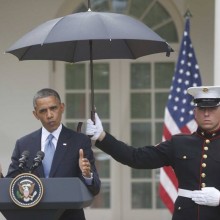 It’s become clear now after months of speculating that Barack Hussein Obama is the one that gave the order to stand down when he could have authorized Marines to protect American lives in order to protect his political backside. However, Obama doesn’t have a problem ordering Marines to stand holding umbrellas over him and the Turkish Prime Minister. It’s simply shameful and a disgrace to our Marines.

Keep in mind that the Turkish Prime Minister is the same man who said the following:

“The mosques are our barracks, the domes our helmets, the minarets our bayonets and the faithful our soldiers.”

Keep in mind that the Prime Minister previously told Barack Hussein that there was no extreme Islam, no moderate Islam, only Islam. “Islam is Islam.” He is telling you the truth on this my fellow Americans. Wake up!

Even worse, Sharia Versus Freedom reminds us:

Former Turkish prime minister Necmettin Erbakan (1926–2011), founder of the fundamentalist Islamic Milli Gorus (National Vision; originated 1969) movement, mentored current AKP leaders president Abdullah Gul, and prime minister Recep Tayyip Erdogan (1954–), both of whom were previously active members of Erbakan’s assorted fundamentalist political parties, serving in mayoral, ministerial, and parliamentary posts. Erdogan, in 1974, while serving as president of the Istanbul Youth Group of his mentor Erbakan’s National Salvation Party, wrote, directed, and played the leading role in a theatrical play titled Maskomya, staged throughout Turkey during the 1970s. Mas-Kom-Ya was a compound acronym for “Masons-Communists-Yahudi”—the latter of course “Jews”—and the play focused on the evil, conspiratorial nature of these three entities whose common denominator was Judaism. More recently, when the wildly popular, most expensive film ever made in Turkey, Valley of the Wolves (released February, 2006) included a “cinematic motif” which featured an American Jewish doctor dismembering Iraqis supposedly murdered by American soldiers in order to harvest their organs for Jewish markets, Prime Minister Erdogan not only failed to condemn the film, he justified its production and popularity.

Now considering this short stroll down jihadist memory lane and that attack in Benghazi my Islamists on September 11, 2012 that left four more Americans dead by these savages, I ask where is America’s outrage over the scene that unfolded.

As the two were speaking, Obama told the Marines, who were in full dress uniform, to protect him from the rain so his suit wouldn’t get wet.

“Why don’t we get a couple of Marines [to hold umbrellas],” Obama said. “They’re gonna look good next to us.”

The arrogance of this man is beyond belief! Here is a man embroiled in several scandals, including one that questions whether or not he can even hold the office, another in which four Americans are dead apparently due to his call, another includes hundreds of dead Mexicans and two federal agents, and others that clearly violate ethics and the Constitution, and yet he has the audacity to treat these Marines as though they are mere servants.

While I think it takes a lot for a Marine to accept this kind of abuse, especially in light of how Obama has treated their fellow Marines and other soldiers who are a part of the United States military, it does not excuse Obama’s actions.

I wonder why it is that Obama thinks Marines are better used to protect his suit, than protect American lives.