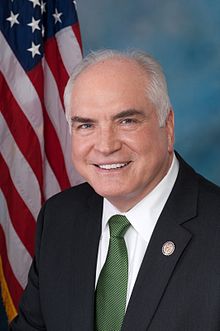 Mike Kelly carried the frustration of Conservative America on his shoulders today as he grilled outgoing IRS Commissioner Steven Miller. Though his line of questions seemed like more of a “venting” session, someone in the House needed to do a little venting for Conservative Americans today.

Right-wing Americans are sick and tired of being made out to be second class citizens because we believe in the principles on which this country was built. Those of us who have ever dealt with the IRS, and felt that we were wronged, would view Kelly’s rant as mild but it’s a start. Kudos to Mike Kelly.

Rep. Mike Kelly, R-Pa., seemed to capture the angst against the agency toward the end of the hour-long hearing, as he described the ways its agents are capable of ruining lives.

“You can put anybody out of business that you want. … When the IRS comes in there, you’re not allowed to be shoddy,” he said, suggesting the agency’s leadership was being held to a different standard now that it is coming under scrutiny.

“This is absolutely an overreach, and this is an outrage for all Americans,” he said.

When he finished, the committee room erupted in cheers and applause that lasted several seconds.

The hearing, though, was more than just venting.

While Democrats voiced concern that the latest scandal would be used to score “political points,” lawmakers on both sides of the aisle scolded the agency. And they made clear they’d be pressuring the IRS in the weeks to come on several points – namely, who was responsible and whether lawmakers were overtly lied to last year.

Here is a video of Mike Kelly’s questioning:

In a related story, Representative Kelly also released a statement today to inquire if “Auto Dealership Closures” were also political. The letter was co-signed by Rep. Jim Renacci (R-OH) and Rep. Scott Rigell (R-VA). Here is Kelly’s statement with a link to the letter he co-signed:

The IRS’s now-confirmed targeting of conservative groups is a frightening reminder that no branch or department of the federal government is immune from overstepping legal and ethical boundaries. Oftentimes holding government accountable means having to dig for the truth, which is exactly what this letter is about. The Treasury Department’s Inspector General report from the aftermath of the auto bailouts indicated that ‘little or no documentation of the decision-making process to terminate or retain dealerships’ exists, making it ‘impossible in many cases’ to determine if decisions deviated from ‘supposedly objective criteria.’ In light of the department’s unthinkable breaches of public trust still being revealed by the IRS scandal, my colleagues and I have a duty to examine whether auto dealers across the country saw their businesses close as a result of similar political profiling.

Nothing would surprise America at this point.