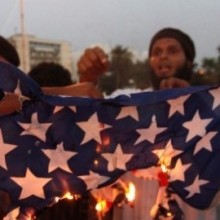 In a display of what has been going on for years under the Obama administration as they attempt to whitewash Islam, The Department of Homeland Security, who is openly declaring they are keeping an eye on outspoken conservatives, listing them first as religious extremists in their training manuals, has taken a different approach to dealing with Islamists. According to a 2011 memo they are bent on not only whitewashing Islam, but also seeks to lend credibility to the criticisms of pro-Sharia Muslim supremacists against the American system of government.

Charles Johnson, who provided the information about Adam Kokesh, reports,

In a checklist obtained by The Daily Caller entitled “Countering Violent Extremism Dos and Don’ts” the DHS’s Office of Civil Rights and Civil Liberties notifies local and national law enforcement officials that it is Obama administration policy to consider specifically Islamic criticism of the American system of government legitimate.

This policy stands in stark contrast to the DHS Office of Intelligence and Analysis’ 2009 memo “Rightwing Extremism: Current Economic and Political Climate Fueling Resurgence in Radicalization and Recruitment” [pdf], which warned of the dangers posed by pro-life advocates, critics of same-sex marriage and groups concerned with abiding by the U.S. Constitution, among others.

The advice of the Dos and Don’ts list is far more conciliatory. “Don’t use training that equates radical thought, religious expression, freedom to protest, or other constitutionally-protected activity, including disliking the U.S. government without being violent,” the manual’s authors write in a section on training being “sensitive to constitutional values.”

What’s an even more flawed view of Islam and terrorism is the manual’s advisement that Trainers who equate the desire for Sharia law with criminal activity violate basic tenets of the First Amendment.”

In fact, the checklist advises against using what they refer to as “moderate Muslims” (something that even Turkey Prime Minister Recep Tayyip Erdogan said doesn’t exist and I agree with him). According to the checklist such trainers who are “self-professed ‘Muslim reformers’” just “may further an interest group agenda instead of delivering generally accepted, unbiased information.”

However, they go further. Under the section of “Training should adhere to government standards and efforts,” number 3 reads:

“Don’t use training that relies on fear or conspiracies to motivate law enforcement. Don’t use training premised on theories with little or no evidence to support them. Examples (from the report “Manufacturing the Muslim Menace”) of unsubstantiated theories include:

Well, now stop and think about that. After my piece on Kokesh, I was referred to as a statist for pointing out the man’s affiliations. Many of those same people who called me such (which I am not) are putting forth these same government lines. However, what is the reality? It appears that many of them are attempting to pass Islam off as harmless and American friendly. It is anything but that. Just take a look at how Muslims under Sharia treats women who are gang raped.

Take William Coley from Muslims4Liberty. Coley went to Tennessee to infiltrate Tea Party groups there in order to eliminate sharia prohibitions from the Tennessee statute. In fact, Coley claims that “Libertarian principles not only exist, but originate with Islam” and that “social, economic, and political involvement” should be “based upon the overlapping principles of Islam and libertarianism.”

Islam has a world dominance goal and that is either though submission or conversion to Islam. That, my friends is a fact with nearly a 1500 year track record. If you wish to bury your head in the sand, fine, but don’t say it isn’t happening. This also goes hand in hand with how jihad works as well.

Ponder the fact that the Islamic Society of North America, which virtually every mosque in America contributes to, is opposing the Second Amendment to the United States Constitution and has joined hands with the Brady campaign to do so.

How about a terrorist arrested in Georgia planning violent jihad or the 35 terrorist training camps that are now operating inside the United States under the watchful eye of the very people who are telling you that this is all conspiracy.

Barack Obama declared to the United Nations, which has a large majority of Islamic nations in it, “The future must not belong to those who slander the prophet of Islam.”

Finally, consider who is in power and who work in the Obama administration. At least six American Islamist activists are Muslim Brotherhood operatives. As Freedom Fighter Radio has pointed out, “Obama and Janet Napolitano appointed Arif Alikhan, a devout Muslim, as Assistant Secretary for Policy Development. DHS Secretary Janet Napolitano swore-in Kareem Shora, a devout Muslim, who was born in Damascus, Syria, as ADC National Executive Director as a member of the Homeland Security Advisory Council (HSAC).

Others FFR lists as appointees of the Obama administration for the Homeland Security Advisory Council (HSAC) are:

So let me ask you, does it appear a bit conspiratorial to you that Islamists are now in key positions in the US government, including the deputy chief to former Secretary of State Hillary Clinton, many of which Representative Michele Bachmann tried to warn America about? Does it make you a little unnerved that the new head of the Central Intelligence Agency is former assassination czar and Muslim convert John Brennan? Do you really believe that Islam is not a threat to the West? Perhaps we should look at what Islam teaches and what it does, not what the government tells us about it. After all, even when there was a Republican President in the office he would not call out Islam, but spoke similar to Allen West’s capitulation, and said Islam had been hijacked. No it has not. Islam is the enemy of America, freedom, Christians, Jews, and anyone else, along with their respective cultures. If you won’t take my word for it, take the Turkish Prime Minister’s.

Here’s the checklist. Read it for yourself.