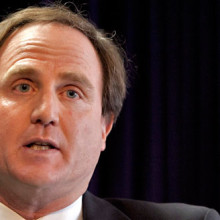 According to a report published on Monday from the Office of the Inspector General concerning the improper disclosure of the U.S. Department of Justice information to a member of the media, U.S. Attorney for Arizona Dennis Burke purposefully leaked a document with the intention to smear John Dodson, one of the Operation Fast and Furious whistleblowers.

The IG reports that “Burke’s conduct in disclosing the Dodson memorandum to be inappropriate for a Department employee and wholly unbefitting a U.S. Attorney.”

“We are referring to OPR our finding that Burke violated Department policy in disclosing the Dodson memorandum to a member of the media for a determination of whether Burke’s conduct violated the Rules of Professional Conduct for the state bars in which Burke is a member,” the IG wrote.

“We also concluded that Burke’s disclosure of the Dodson memorandum to Levine was likely motivated by a desire to undermine Dodson’s public criticisms of Operation Fast and Furious,” the report continued. “Although Burke denied to congressional investigators that he had any retaliatory motive for his actions, we found substantial evidence to the contrary.”

The report went on to state:

In sum, we found that Burke violated Department policy when he provided the Dodson memorandum to Fox News reporter Levine without Department approval, and that his explanations for why he did not believe his actions were improper were not credible. We believe this misconduct to be particularly egregious because of Burke’s apparent effort to undermine the credibility of Dodson’s significant public disclosures about the failures in Operation Fast and Furious.

We found Burke’s conduct in disclosing the Dodson memorandum to be inappropriate for a Department employee and wholly unbefitting a U.S. Attorney. We are referring to OPR our finding that Burke violated Department policy in disclosing the Dodson memorandum to a member of the media for a determination of whether Burke’s conduct violated the Rules of Professional Conduct for the state bars in which Burke is a member.

The report also indicates that Burke said that Dodson’s decision to talk to Congress about Fast and Furious was “unbelievable.” Though he resigned from his post as a U.S. Attorney in 2011, he would later tell congressional investigators that he viewed leaking the document as a “mistake.”

Burke was the first official to leave his position in the Fast and Furious scandal. Additionally, emails were uncovered in which Tracy Schmaler, the Director of the Department’s Office of Public Affairs, who resigned her position at the DOJ, demonstrated that she had worked with Media Matters for America in order to smear Dodson and other Fast and Furious whistleblowers along with members of Congress and the media who sought to investigate the scandals of the Obama DOJ.

As a refresher, Burke served as Janet Napolitano’s chief of staff during her time as Arizona governor (for seven years), served as Napolitano’s Homeland Security advisor until September 2009 (when Fast and Furious started), was appointed by President Obama as U.S. Attorney in Arizona in September 2009 and served on Attorney General Eric Holder’s Attorney General’s Advisor Board until his resignation in August 2011.

“This is a critical and exciting time for the Department of Justice and I will rely heavily on these U.S. Attorneys as we work to further the Department’s efforts to reduce violent crime and gang violence, promote civil rights, ensure fairness in the marketplace and above all, preserve our national security,” said Attorney General Holder.

I am seriously beginning to wonder if anyone has any idea to get rid of these criminals in the Obama administration or will we just be doomed to hearing about hearings and reports. I’m hopeful someone will be able to deal with these guys and is willing to put their political clout all on the line to do it.