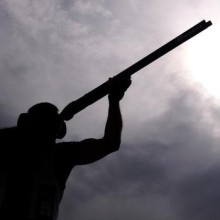 A couple of weeks ago we told you about Cole Withrow, a high school student who, after going skeet shooting, had forgot that he left his gun in his vehicle. Once he arrived at school, he realized his mistake and attempted to call his mother to have her come get it and was overheard by school officials promoting him to be suspended. Michael Watts is a student at Halifax County High School in South Boston, Virginia. After he and some friends went hunting, he and another boy had left their hunting rifles in their vehicles and drove to school. Watts had forgotten it was beneath tools locked in his toolbox on the back of his truck. He had also left shotgun shells in the floorboard of his truck. Upon seeing the shotgun shells, the school sought to search his vehicle and found the gun in his toolbox. He was suspended. However, another young man at the school, his friend, got off a little easier than he did for the same issue.

The community around South Boston is a hunting community. It is very similar to my own. One would think that the school would take that into consideration when evaluating the issue, but they did not.

Michael’s mother, Christy, told Freedom Outpost, “They did a random search at school and my son is an avid hunter a baseball player and well known in his school. They had gone hunting on Monday and he left shotgun shells in his floorboard which was a cause to search his truck. When they searched a stroke they went in his toolbox and at the bottom of this tool box there was a rifle, his hunting rifle. So they got him for the gun at school and they were going to charge him criminally, but it was in a locked container. So they could and press any felony charges on him because of that.”

“Michael has never gotten in trouble at school before,” she continued. “He plays legion ball. He’s been on school ball teams since the seventh grade.”

The School Board gave Michael to the end of this school year to not get into trouble and then they will expunge his record on the last day of school.

There was another boy on the same day who was caught with a rifle in his car. Michael, his friend and others had just gone hunting on that Monday. This young man was an honor society student. He was also sent to alternative education and had to drop the class because they could not provide what he needed.

Mrs. Watts stood up to the Halifax County School Board by herself and finally got Michael back in school May 1, 2013 and she believes it was only to shut her up. The family of the other boy would not attend the school board meeting with Mrs. Watts.

“You will not rob him of his education,” she declared. “You’re failing him by having him over an alternative education. You want him to pass his SOLs and his exams, then he needs to be in class.”

The School Board consists of seven elected officials and the Superintendent, Merle P. Herndon.

“It has been a nightmare,” recalls Watts. “My feeling is that the State gives the school board entirely too much authority to ruin the lives of these kids.”

“If he (Michael) would have been a troublemaker and always in trouble all the time, that would have been one thing,” Watts told Freedom Outpost. “When you take a kid with a clean record that truly makes a mistake….. What I’ve told the school board is that ‘changing your floorboard is like shotgun shells and my son’s. It’s what he does. He’s not out there making trouble. He’s not out there doing drugs. He goes hunting. He’s playing ball. He’s fishing. This is what he does and we live in a hunting community.”

According to Watts the principal and the assistant principal were behind him. “They did everything they could to help us, but it came down to the school board’s decision.”

Another boy was caught the same day with a firearm and because he was labeled a “504,” which according to the Virginia Department of Education means the boy was deemed “special education” or a learning disability, he was allowed back in class after a few weeks in alternative education.

Julie C. Grimes, Communications Manager for the Virginia Department of Education, sent me the information concerning how the VDOE deals with special education students, which can be downloaded here. According to the “Parents Guide,”:

Under what circumstances is my child removed to an interim alternative educational setting (IAES)?

Interim Alternative Educational Setting (IAES). A school may remove your child to an appropriate IAES for up to 45 calendar days for:

·         carrying a weapon to or possessing a weapon at school, on the school premises, or a school function;

·         possessing or using illegal drugs or selling or soliciting the sale of a controlled substance while at school, on the school premises, or a school function; or

·         inflicting serious bodily injury on another person at school, on the school premises, or a school function.

If the safety of the school or your child is at issue, a school may assign him or her to an IAES for up to 10 days after consultation with the special education teacher and then request:

·         a hearing officer’s order for a longer stay up to 45 days in an IAES through an expedited hearing; or

Ms. Grimes also provided me information from the special education people. She informed me that Section 504 is “a federal law enforced by the Office of Civil Rights within the US Department of Education.  There is no “Virginia” law on Section 504.  That being said, under Section 504, if a student with a section 504 plan is removed for more than 10 days, then the division must conduct a manifestation determination.  If the conduct is determined to be a manifestation of the disability, then the student cannot be removed.  If it is determined not to be a manifestation, then the student can be disciplined in the same manner as a student without a disability.  The major difference between Section 504 and the IDEA in this regard is that services do not have to be provided to the 504 student during the removal unless the school division provides services for non disabled students when they are removed.”

Mrs. Watts says that things could have been settled in a preliminary hearing and that her son would not have had to even gone before the School Board. That was not the route that was chosen though.

The treatment of students on the same infraction simply because one is deemed special education and the other is not is far from just. In fact, Watts’ gun being where it was, it being in a known hunting community and his character should not have resulted in what took place. Watts did not commit a crime nor was he charged with one. It appears there are just some overzealous school officials who want to push an agenda.

Clearly Watts was not a threat and had nothing in his history to indicate that he was. He simply forgot his gun was in his truck. One would think those closest to him at his school would think long and hard about punishing a young man like this for simply being forgetful.

Freedom Outpost made attempts to get a statement from Merle P. Herndon, the school’s superintendent. All calls were not returned and no email statement was received. This is a very similar incident to the one involving Cole Withrow that made national news, only this one occurred in Virginia. Withrow was offered a scholarship to attend Liberty University. I’m wondering if anyone out there will come to the aid of this young man.

Furthermore, I would continue to advise parents to remove your children from the public school system. Get out! Educate them at home. You’ll be glad you did.

If you wish to contact Halifax County Public Schools and the Superintendent, here is their contact information.