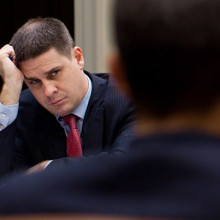 White House senior adviser Dan Pfeiffer went on three Sunday shows and indicated that the Obama administration is irrelevant in the midst of growing scandals, including Benghazi talking points, where Obama was during the Benghazi attacks, and the IRS debacle.

Pfeiffer appeared on CBS’s Face the Nation and told Bob Schieffer that is was “largely irrelevant” who edited the talking points which the Obama administration pushed on the American people following the attacks in Benghazi on September 11, 2012.

Scheiffer asked, “That was just a PR plan, to send out somebody who didn’t know anything about what had happened. Why did you do that? Why didn’t the Secretary of State come and tell us what they knew, and if they knew nothing, say ‘We don’t know yet?’ …. Why are you here today? Why isn’t the White House Chief of Staff here to tell us what happened?”

Pfeiffer answered, “What we do is we want to go out and speak to the problems as they happen. And what’s important here is that when problems happen, the President takes responsibility for them and tries to fix them. That’s what we’re talking about in Benghazi. It’s an absolute tragedy what happened. The question isn’t, ‘Who edited what talking points?’ That’s largely irrelevant.”

He then showed up on Fox News Sunday where he was asked by Chris Wallace, “What did the President do the rest of that night to pursue Benghazi?”

“Look, the President was kept up to date on this as it was happening the entire night, from the moment it started until the very end,” he said. “I recognize that there’s a series of conspiracy theories Republicans have been spinning about it since the time it happened.”

“The question here is not what happened that night,” he added.

Wallace wasn’t going to let that stand. “With due respect, you didn’t answer my question: what did the president do that night?”

While Pfeiffer said that he was in touch with his national security team, Wallace pointed out that he only had one conversation with his Secretary of State, Hillary Clinton, and that occurred after the attack was over. Wallace pointed out that Obama didn’t talk to any of the other important people in his administration, including his Defense Secretary or the Joint Chiefs of Staff.

When asked if Barack Obama was even in the Situation Room, Pfeiffer exclaimed, “I don’t remember what room the President was in on that night and that’s a largely irrelevant fact.”

Pfeiffer was an evader the entire time, never actually answering the questions that were posed to him.

Finally, Pfeiffer appeared on ABC News’ This Week with George Stephanopoulos where he told the host that the Internal Revenue Service’s targeting of conservative groups was “inexcusable.” However, he then went on to attempt to deal with the law without dealing with the law by saying it was “irrelevant.”

“I can’t speak to the law here,” he said. “The law is irrelevant. The activity was outrageous and inexcusable, and it was stopped and it needs to be fixed so we ensure it never happens again.”

When Stephanopoulos asked him to clarify his statement, Pfeiffer said, “What I mean is, whether it’s legal or illegal is not important to the fact that the conduct doesn’t matter. The Department of Justice has said they’re looking into the legality of this. The president is not going to wait for that. We have to make sure it doesn’t happen again, regardless of how that turns out.”

Wow! Just Wow! Whether or not the IRS’ actions are legal or illegal is not important? That’s just a statement from someone attempting to cover the Obama administration’s backside is what that is.

All I have to say is that Dan Pfeiffer is the new Susan Rice. He’s being trotted out to make these “irrelevant” statements about the criminal and very relevant scandals that have occurred in this administration.