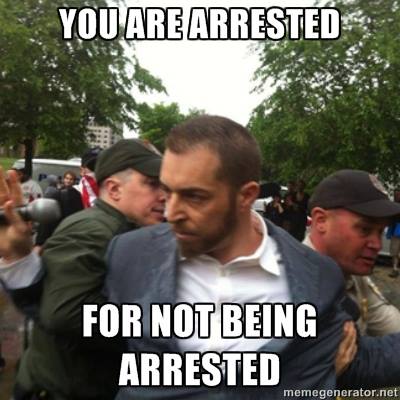 Sometimes the truth is stranger than fiction. Adam Kokesh was arrested on Saturday at a Pot Rally. I have been waiting for someone to say it, because honestly I didn’t want to touch this story. But no one has said it, so I will. Again, is this really a guy that you want to follow in an armed march on Washington D.C.? Come on. Really?

Kokesh showed some more of his true colors on Saturday when he was arrested at Pro-Marijuana Rally in Philadelphia. So the obvious question is… Do you really want to follow a pothead in an armed march? Actually that may not be totally fair. Is Kokesh a pothead? I don’t know but I do know this guy is definitely a loose cannon and he is all over the board politically. But, for the record, I think we should watch him in action, once again, and make our own decisions if we want to be associated with him and his armed march.

I would be remiss if I did not tell the other part of the story that is coming from Kokesh supporters. From everything that is being reported the only charge that has been filed is “resisting arrest.” I have no way of knowing if that is accurate but if it is then that’s ridiculous. It doesn’t look to me like he was resisting arrest in this video and I am not certain why they arrested him in the first place.

Regardless of the charge I am not sure I have seen evidence in the video of Mr. Kokesh committing any crime. And no matter what I feel about him personally I must stand on the side of liberty. I saw nothing but a guy with a microphone.

The story gets deeper and I find this somewhat comical. I find it comical because it proves that right-wingers are not the only members of the “Tin Foil Hat Society.” I am a card carrying member so please don’t take that personally.

For now we have been told that the only charges are “resisting arrest.” If a drug charge surfaces then we might have reason to take the following videos a bit more seriously. The theory is that this was a set up and some guy tried to plant drugs on Kokesh as he was being arrested. Some cameras caught the possible exchange.

Here is a similar video that is slowed down and with a slightly different angle:

OK, this is where is gets really strange. And I mean REALLY strange. My first thought after hearing the charges were only “resisting arrest” was that this was simply a pot head who was trying to unload his stash on someone else to let them take the fall. But then again, why would someone do that? Why not just drop it on the ground and hope the police didn’t notice?

So was someone trying to set Adam Kokesh up? Maybe. You can’t make this stuff up. This is bizarre. The man that was trying to plant drugs, or cop a feel, or whatever he was trying to do, is none other than Don DeZarn. Are you kidding me? Don DeZarn?

I can see by the blank stares in the audience that many of you have been to past Kokesh rallies. 🙂

OK so he is not a household name but Don DeZarn just happens to be a Libertarian with aspirations of being a New Jersey State Senator.

Thank goodness for small obscure bloggers because you won’t find this story on any mainstream source and you won’t find it on any of the big right-wing sources either. Alex Jones is following the story of course but other than that you won’t find much. This is from a blog called Free Keene:

“There was a crackdown at the Smoke Down at the Liberty Bell in Philadelphia yesterday, May 18th, 2013, as police presence was at an all time high, and at an all time low for their violent thuggish behavior, when they forcefully arrested at least four peaceful liberty lovers. Much footage and controversy is coming forward about these arrests of Adam Kokesh, N.A. Poe, NJ Weedman, and Don Dezarn. The latest news indicates that Don Dezarn and the NJ Weedman were released immediately on the spot, with citations. Adam Kokesh was reported by one source to have been released, but other sources say he and N.A. Poe are now detained in the Philadelphia Federal Detention Center, to face arraignment and bail hearings on Monday May 20th.  Here is some of the footage of the whole Smoke Down event, Don Dezarn gets released at 28:41 point in the video,”

I have personally had my fill of this story. It’s insane. We will find out soon enough what Kokesh is charged with and go from there.

It does not change any of the facts for me. I think the July 4th armed march is bold but stupid. I don’t think it is the right way to go about things, and even if I did agree with the armed march I certainly would not be following Kokesh. As if I didn’t have enough reasons to mistrust his liberal ideologies already, now I get to see him in the light of a bold spokesman for the stoner community. No thanks. I’ll watch the march on the news.

Some Patriots are so desperate for a leader to emerge that they would be willing to follow anyone at this point. I am growing very angry at the conservative leadership which has been very silent about this march. They need to talk to the constituents. Obviously they do not want to cost themselves votes by picking sides. At any rate I’m not following a potential pothead into a potential gun fight.

If we find out that Kokesh has some major charges that include things like “possession” then I think the tin foil hat guys on the left may have nailed this one. Time will tell.

I have to laugh about it. This is one of the most bizarre stories of the year and it promises to get stranger. I’d suggest you tune into Infowars for updates. I think I’m done with this one, unless we find out that DeZarn is a potential reptilian leader who is tied to The Illuminati. That would be big news. 😉