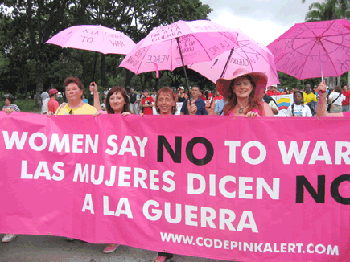 This is not an excuse but an explanation. I found the below image and associated articles from sources which I deemed credible. Even the most credible publications can make mistakes. It appears that this widely circulated photo is nothing more than a photoshop hoax.

I would like to take this opportunity to express my sincere apology, not only to Code Pink but also to anyone who read the story (which has been taken down until I have time to rewrite it). I seek the truth and whenever I discover that I have reported something in error I will always attempt to fix it.

Again I am embarrassed and extremely sorry for my inaccurate representation in this matter. I would love to blame the sources that I got the information from but that would be a cop out. Sometimes in my haste to report a story that I think is important I do not do enough research to substantiate.

Here is a copy of the orginal as well as the photoshopped version, side by side.

This in no way changes my opinions of the armed march that Adam Kokesh is planning. I think it is a bad idea. I do however feel that he is being violated with his recent Philadelphia arrest and the evidence would seem to lean toward him being the target of some sort of set up. Time will tell what happens there but either way I can not support that march.

I can also not agree with any organization that does not support the NRA but now is not the time to get into that.

I apologize. I will learn from my mistake and endeavor to be more accurate in the future. I don’t like making mistakes. As I have always said…I seek the truth.