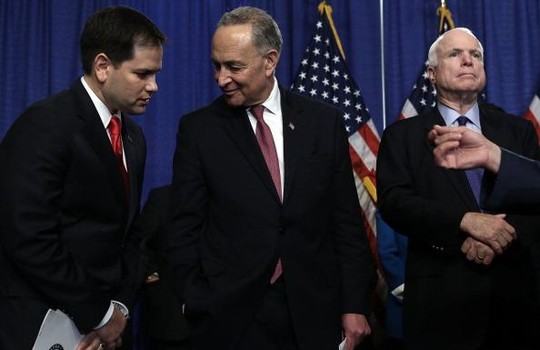 Bill would legalize 44 percent of ICE criminal caseload in Texas

WASHINGTON, May 21, 2013 /PRNewswire-USNewswire/ — The state of Texas has by far the highest number of convicted criminals, as opposed to mere arrested immigration violators, who would be legalized by the Schumer-Rubio amnesty, S.744.  In just the most recent six-month period, 3,996 convicted criminals (classified as Level 3 under ICE parlance) and immigration violators would have qualified for legalization under the proposed amnesty.

The eligibility criteria established for the amnesty are so generous that 45 percent of the criminal aliens in ICE’s recent caseload would qualify for legal status, according to the Center for Immigration Studies’ examination of ICE records. Tens of thousands of illegal immigrants with criminal convictions, and tens of thousands of aliens with arrests on top of serious immigration violations would be legalized under the provisions of the Gang of Eight bill. The proposed amnesty would significantly curtail ICE efforts to expel immigrants who have been a threat to public safety in American communities, including gang members, drunk drivers, and other offenders considered non-serious by the bill’s proponents.

“I shudder to think about how many Americans and legal immigrants will become the victims of future crimes, particularly inTexas where the highest number of convicted criminals would be legalized. It’s no wonder so many law enforcement leaders have gone public with their opposition to the Schumer-Rubio amnesty bill,” commented Jessica Vaughan , the Center’s Director of Policy Studies. “This measure will legalize tens of thousands of offenders who should be deported instead. The Gang of Eight seems more intent on protecting lawbreakers than protecting our communities.”

While interior enforcement and removals of convicted criminals have declined very noticeably in the last two years under the Obama administration’s “prosecutorial discretion” policies, ICE has continued to remove some of the aliens who are referred after arrest by state, local, and federal law enforcement agencies under the Secure Communities program. In the most recent six-month reporting period (October 1, 2012 to March 31, 2013), ICE removed 38,547 aliens who had been identified as a result of arrest by a state, local, or other federal law enforcement agency. Of these, 55 percent (21,339) were convicted of a felony or at least three misdemeanors. The other 45 percent (17,208) were lesser offenders who would be exempt from deportation and eligible for legalization under the Schumer-Rubio amnesty.

The 15 states most affected, in terms of the number of criminal aliens who would be legalized, are, in order of magnitude:California, Texas, Arizona, Florida, Georgia, New York, Washington, North Carolina, Colorado, Virginia, Tennessee, South Carolina, Oklahoma, Nevada, and Illinois. The state with the highest percentage of its criminal aliens who would qualify for amnesty is New York.