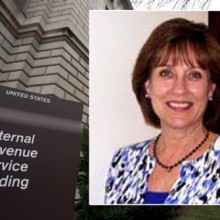 On Tuesday afternoon another bombshell was dropped in the ongoing Internal Revenue Service (IRS) scandal. Lois Lerner, a top official in the non-profit division of the IRS, which targeted Tea Party and conservative groups by harassing them, is reported to invoke her Fifth Amendment rights to witness against herself during testimony before Congress’ House Oversight Committee on Wednesday.

“The committee has been contacted by Ms. Lerner’s lawyer who stated that his client intended to invoke her 5th amendment right and refuse to answer questions,” said oversight spokesman Ali Ahmad.

Though her lawyer William W. Taylor III requested that she not be forced to attend the hearing, Chairman Darrell Issa (R-CA) did issue a subpoena that compels her to appear and it is still in effect. The subpoena is to have her explain why she provided “false or misleading information” to Issa’s committee four times last year. She got four Pinocchios from the Washington Post for her lies.

“Ms. Lerner remains under subpoena from Chairman Issa to appear at tomorrow’s hearing — the committee has a Constitutional obligation to conduct oversight,” Ahmad said. “Chairman Issa remains hopeful that she will ultimately decide to testify tomorrow about her knowledge of outrageous IRS targeting of Americans for their political beliefs.”

“She has not committed any crime or made any misrepresentation but under the circumstances she has no choice but to take this course,” said a letter by Taylor to Issa.

Since Lerner won’t answer questions, Taylor asked that she be excused from appearing, saying that would “have no purpose other than to embarrass or burden her.” There was no immediate word whether the committee will grant her request.

According to an inspector general’s report, Lerner found out in June 2011 that some staff in the nonprofits division in Cincinnati had used terms such as “Tea Party” and “Patriots” to select some applications for additional screening of their political activities. She ordered changes.

But neither Lerner nor anyone else at the IRS told Congress, even after repeated queries from several committees, including the House Oversight panel, about whether some groups had been singled out unfairly.

In a matter that smacks of the way the Obama administration played with talking points regarding Benghazi, Lerner was part of the effort to control how the IRS scandal went public. While her testimony is considered to be incredibly important in finding out who gave her the OK to engage in harassment and who participated in, we’ll have to wait and see whether or not we’ll actually hear from her on Wednesday.