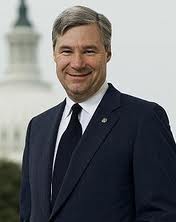 This takes me back to the day of the Sandy Hook shootings and I am equally disgusted. On that day I was repulsed by not just anti-gun people but pro-gun people as well. Just an hour or two after the news broke, people took to social networks to start the fight that now continues. There is a certain amount of respect that is due the families who are involved in such tragedies and some people just can’t seem to grasp that.

On Monday as most people were glued to their televisions watching the horrible carnage of a natural disaster, and before the bodies could even be counted, a Democratic Senator from Rhode Island took the the Senate floor to talk about global warming. The Daily Caller reports:

Whitehouse spent 15 minutes chastising GOP senators and justified his remarks by alluding to states that seek federal assistance in the wake of natural disasters.

“So, you may have a question for me,” Whitehouse said. “Why do you care? Why do you, Sheldon Whitehouse, Democrat of Rhode Island, care if we Republicans run off the climate cliff like a bunch of proverbial lemmings and disgrace ourselves? I’ll tell you why. We’re stuck in this together. We are stuck in this together. When cyclones tear up Oklahoma and hurricanes swamp Alabama and wildfires scorch Texas, you come to us, the rest of the country, for billions of dollars to recover. And the damage that your polluters and deniers are doing doesn’t just hit Oklahoma and Alabama and Texas. It hits Rhode Island with floods and storms. It hits Oregon with acidified seas, it hits Montana with dying forests. So, like it or not, we’re in this together.”

“You drag America with you to your fate,” he continued. “So, I want this future: I want a Republican Party that has returned to its senses and is strong and a worthy adversary in a strong America that has done right by its people and the world. That’s what I want. I don’t want this future. I don’t want a Republican Party disgraced, that let its extremists run off the cliff, and an America suffering from grave economic and environmental and diplomatic damage because we failed, because we didn’t wake up and do our duty to our people, and because we didn’t lead the world. I do not want that future. But that’s where we’re headed. So I will keep reaching out and calling out, ever hopeful that you will wake up before it is too late.”

This is totally classless Senator Whitehouse. I don’t care which side you are on, it is in bad taste to start throwing stones before the dead are even counted, let alone buried. I feel the same way about the pro-gunners who were out just hours after those innocent school children were slaughtered in Newtown, CT.

The families deserve respect. How would you feel if you had just lost a child and started seeing this stuff in the press? I hope I never have to find out but I would suspect I would feel incredibly disrespected in my time of loss.

Sheldon Whitehouse, you should be ashamed. We are all imperfect and sometimes our passion for the issues gets the best of us. I have done it.

I would hope that you would take the opportunity to see how you have disrespected these families and issue some sort of apology. Whether conservative policies are to blame is not even the issue today. The issue is another politician trying to capitalize on emotion in the wake of tragedy.

Gather your facts and debate logically. In the mean time show the families the respect they deserve. This story broke many hours before I had to take my family to a tornado shelter. I live in Missouri and we were lucky here but not everyone was.

If those tornadoes would have ripped through our shelter I would have not wasted my last breath uttering “Damn Republicans.” I would have told my family that I love them. There are a lot of people trying to cope with the emotion of having to say “goodbye” and we don’t need a lecture on environmentalism from a Rhode Island Senator who is basically saying, “I told you so.”

Blame does not matter at this point. Prayer and proper mourning does.