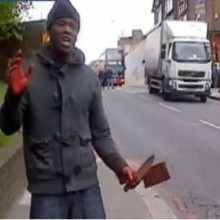 Reports are coming in that there has been an attack in London, not with bombs or planes flying into buildings, but with machetes and firearms. At least one man is dead and two injured, who were shot by armed police. The video below is apparently one of the men involved as he attempts to justify the murder.

According to The Independent the victim was a soldier, who was beheaded right out in the street. The site reports,

Several witnesses described seeing a “beheading” as a man was reportedly attacked with a machete-style weapon and dumped in a south-east London street.

Woolwich and Greenwich MP Nick Raynsford said he understood that a serving soldier was dead. The Ministry of Defence have not confirmed whether the dead man was a soldier.

London Air Ambulance confirmed a man was found dead as one patient was airlifted from the scene, while another was taken away by road ambulance.

One witness, identified only as James, said he and his partner saw two men attack a young man aged around 20 like he was “a piece of meat”.

Metropolitan Police Commander Simon Letchford said in a statement: “At approximately 1420 we were called to reports of an assault in John Wilson Street, Woolwich, where one man was being assaulted by two other men. A number of weapons were reported as being used in the attack, and this included reports of a firearm. Officers including local Greenwich officers arrived at the scene and shortly after firearms officers attended the scene.”

“On their arrival at the scene they found a man, who was later pronounced dead. At this early stage I am unable to provide any further information about the man who has died.

“Two men, who we believe from early reports to have been carrying weapons, were shot by police. They have both been taken to separate London hospitals. They are receiving treatment for their injuries.”

A Twitter user named @BOYADEE wrote: “Ohhhhh myyyy God!!!! I just see a man with his head chopped off right in front of my eyes!”

Jim Stachowiak, the man I host a radio show with, was in contact by a friend in England within moments of that attack. The man indicated London was under attack, not knowing if this was going to be one in a series of attacks or an isolated incident.

The Guardian is reporting,

The home secretary, Theresa May, has called a meeting of the government’s emergency Cobra committee in response to a suspected terrorist attack near Woolwich barracks, south London, in which one person was killed and two suspects were shot by armed police.

May said: “It has been confirmed to me that a man has been brutally murdered this afternoon in south-east London. Two other men were shot by armed police and they are currently receiving treatment for their injuries.”

The Prime Minister, David Cameron, described the killing as “truly shocking” and said he had asked the home secretary to chair a meeting of Cobra, the government’s emergency committee. Cobra only meets for the most serious incidents.

Downing Street said the prime minister, who was planning to stay, in Paris overnight after meeting the French president, would be returning tonight instead.

The Woolwich and Greenwich MP, Nick Raynsford said,”
“The incident occurred early afternoon. One individual is dead, two others are seriously injured and in hospital. We think a serving soldier was the victim. We don’t know the circumstances surrounding the incident. We do know a number of weapons have been seized. They include a gun, various knives, and a machete, apparently.”

The Independent Police Complaints Commission is investigating the shooting by police, which is standard in cases where officers open fire.

Good for the police for shooting the perpetrator! At least one outlet had the nerve to say that Islamic terrorism is suspected in the attack. Of all places, it was the LA Times.

“Although authorities are still investigating, news reports say at least one of the alleged attackers shouted, “God is great!” in Arabic while launching the assault, raising the suggestion the attack was motivated by Islamic extremism.”

It’s not Islamic extremism. It’s what Islam is! This is what those who believe the Qur’an are supposed to do and if they don’t, then they come under the wrath of Muslims who believe what their book teaches! Again, if you don’t believe me, believe an Islamist who was just at the White House, who brought a Jihadist with him, that said,

“These descriptions are very ugly, it is offensive and an insult to our religion. There is no moderate or immoderate Islam. Islam is Islam and that’s it.”

Sadly, we have many politicians and candidates running for office, along with so-called patriot organizations headed by leaders who do not see Islam as a threat to America. In fact, they are willing to work alongside and even receive support from them. Why will they not address this issue? It’s time to wake up America before we find ourselves overrun by these savages.

Tim Brown is a regular contributor to The D.C. Clothesline and the Editor of Freedom Outpost. This is a breaking story so please check the Freedom Outpost story to see if there are any updates available.