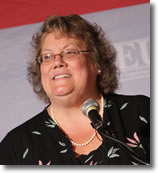 Colleen M. Kelley is the President of the NTEU (National Treasury Employees Union) which represents 150,000 government employees from the IRS and 30 other agencies. She is also a frequent visitor to the White House. I say she is a frequent visitor but that is not exactly true, because she has not officially been to The White House since she met with President Obama on March 31, 2010. That is a significant date in the scope of the IRS scandal. The American Spectator broke this story on Monday so I will defer to them at this point:

“For me, it’s about collaboration.” — National Treasury Employees Union President Colleen Kelley on the relationship between the anti-Tea Party IRS union and the Obama White House

Is President Obama directly implicated in the IRS scandal?

Is the White House Visitors Log the trail to the smoking gun?

The stunning questions are raised by the following set of new facts.

According to the White House Visitors Log, provided here in searchable form by U.S. News and World Report, the president of the anti-Tea Party National Treasury Employees Union, Colleen Kelley, visited the White House at 12:30pm that Wednesday noon time of March 31st.

In White House language, “POTUS” stands for “President of the United States.”

The very next day after her White House meeting with the President, according to the Treasury Department’s Inspector General’s Report, IRS employees — the same employees who belong to the NTEU — set to work in earnest targeting the Tea Party and conservative groups around America. The IG report wrote it up this way:

In short: the very day after the president of the quite publicly anti-Tea Party labor union — the union for IRS employees — met with President Obama, the manager of the IRS “Determinations Unit Program agreed” to open a “Sensitive Case report on the Tea party cases.” As stated by the IG report.

I think it is important to note that Kelley has officially been to The White House five  times since the visitor logs became public but has not been there since that day. It is also important to note that Colleen Kelley is a 14-year veteran of the IRS. There is no doubt she has connections with the agency that go beyond her union connections. This is from her bio on the NTEU.org website:

A Pittsburgh native, certified public accountant (CPA) and an NTEU member since 1974, Kelley was an IRS Revenue Agent for 14 years and served in various NTEU chapter leadership positions, including chapter president of NTEU Chapter 34 in Pittsburgh. She was elected National President in August 1999 and was overwhelmingly re-elected to a fourth four-year term in 2011.

During the annual NTEU convention, Colleen Kelley made a speech to her ‘constituents’, urging them to support the NTEU PAC so that the PAC could go after those politicians who “do not VALUE AND RESPECT FEDERAL EMPLOYEES”.

Remember, Colleen Kelley is the same woman who visited President Obama at the White House just one day before the IRS and the employees who support this woman and her Anti-GOP PAC went on the assault of the groups and organizations that stand against the perpetuation of big government.

Here is some of the commentary from the news repoprt posted by Federal Times News:

Federal Times Reporter- “They are looking to channel money [from their PAC]….to democratic Senate Seats in Nevada for Shelley Berkely, in Virginia for Tim Cain, and in Wisconsin for Tammy Baldwin…..’

Colleen Kelley– “Those who are working against Federal Employees have PACs, and they have PACs with a lot of money, helping to support those who do not VALUE AND RESPECT FEDERAL EMPLOYEES and the work that they do”

Federal Times Reporter- “The Anti-Federal sentiment on the Hill has been a non-stop onslaught, though the Union aims to raise about $715,000 to support politicians battling on behalf of Feds”

Editors Note:  The question we have for this Federal Times Reporter is this- since when is it the politician’s job to ‘battle on behalf of the Feds”?  Shouldn’t they be battling on behalf of the people?  This statement shows that for progressives and democrats, big government is big business, and they’d like to keep it that way, thank you.

This story gets increasingly more bizarre every day. Yesterday we reported a possible connection between Eric Holder and The IRS Scandal. At this point my belief is this…

I don’t know how Obama and Holder are involved specifically but I believe that both have their fingerprints all over this. This administration has been about thug tactics since day one and this IRS scandal is just the latest in a series of low blows from the Marxists in power. This is change we can believe in.